Win Map To The Stars on Blu-ray
Home
Competitions

Win Map To The Stars on Blu-ray 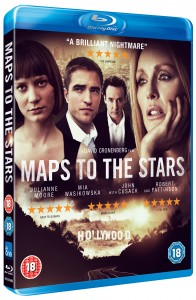 MAPS TO THE STARS follows a secret-filled Hollywood family on the verge of implosion. The Weiss family is the archetypical Hollywood dynasty; father Stafford (Cusack) who has made a fortune with his self-help manuals and mother Cristina (Williams) mostly looks after the career of their child star son Benjie (Bird). One of Stafford’s clients, Havana (Moore), is an actress who dreams of shooting a remake of the movie that made her mother, Clarice, a star in the 60s. Clarice is dead now and visions of her come to haunt Havana at night. Adding to the toxic mix, Benjie has just come off a rehab program he joined when he was 9 and his sister, Agatha (Wasikowska), has recently been released from a sanatorium where she was treated for criminal pyromania and befriended a limo driver Jerome (Pattinson) who is also an aspiring actor. The result is a modern Hollywood Gothic about the ravenous 21st Century need for fame and validation – and the yearning, loss and fragility that lurk in the shadows underneath.

Maps To The Stars is available on Blu-ray and DVD from 2nd February 2015, courtesy of eOne

We have three copies of Map To The Stars on Blu-ray to give away.

For which film has Julianne Moore most recently been nominated for an Oscar?

a) Still Alice
b) Still Life
c) Still Mine