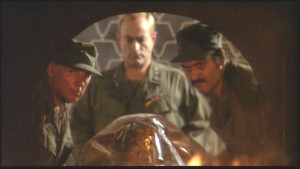 After testing a new batch of the insanely named ‘Death 1’, Dr Holder now knows that this awful virus can reanimate the dead. It is so potent that it can be passed via any bodily fluids, be it spit, blood, semen or the like. The military want it, before it falls into the hands of some awful people that might use it for evil. They set up a collection and transport to a more secure and less tropical – dangerous place. One filled with no hot young women or crazy indigenous people of wandering ethnicity.  When however they try to have the container with ‘Death 1’ flown out of the base it is met with armed robbers. They kill the guards and wound Dr Holder but in the cross fire all but one is killed. This fugitive runs off with the container and in another fire fight is wounded and exposed to the deadly toxin. He decides to hold up in a nearby hotel and wait out the effects of the virus. As he succumbs to the grip of this awful illness and his taste for blood increases a maid knocks on the door and wants to change his bed sheets …. Can you guess what happens next? 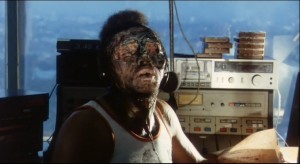 I always know that the genre hounds will get at least a few knickers in a twist over what they see as sacred. Lucio Fulci was a very good film maker on his day and has a admirable back catalogue. This is not one of them but that is to say it is not his film. He retired sick while making it and only lasted a few days according to legend. Now that said the film is a very interesting zombie flick from the Italian industry. Why? Well it has gore and great over the top plot elements. Silly sub plot details and elements of absurdity. You should not come to a film like this expecting high art. No it is a sleaze fest and one that delivers time and again!  You have no coherent story, character development, layers of racism and sexisim but under all that is a simple splatter fest. It is better than its sequel, which is a stinker and a remake of it…says something. This is the sort of film you put on after a hard day at the office and sit back to. 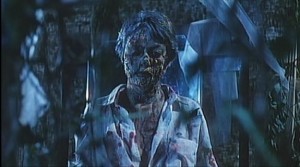 The Blu ray is excellent and not really for the extras on the main disc. The companion disc which has Fulci remembered is excellent and I would say that it is worth the price alone! 88 Films have always been good at making genre films shine and this is a golden one in their catalogue.