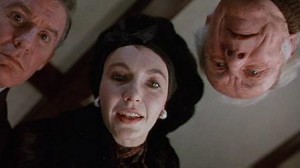 Being an actor in New York is a hard gig. You either rarely do any work and have to scrap by with tiny little bits here or there or you are in everything and people are sick of you. Katie McGovern and her husband Roland are very much in the latter and both have not worked in some time. This changes when a chance casting leads her to Canada and a mansion in the snow where producer Dr Joseph Lewis wants to audition her. He is trying to replace a lead performer that has left the set of his picture. When Katie shoots the audition tape all seems well but as things develop a darker motive appears at work. The lead actress is actually dead, the phone lines are cut and the only way out is to travel 10 miles in freezing snow to town. Now the reality of the mansion and the world within it become clear. 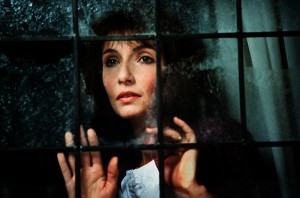 This film derived from a film maker that could not only make films but could do so very well. That is not to say as some have said, that Arthur Penn made technically brilliant films but more to say he created them as an auteur of some merit. The way I would argue this case is that here we have a very simple gothic horror/slasher film that actually transcends its respective genres and moves above them. It does this because of two reasons. The first is that Arthur Penn uses superb lighting, camera work and subtle sound cues to aid the audience and his film along.These are so well defined in the space that they hold the piece together and involve you in the small detail. This means you pick up elements and traits that need not be forced by exposition or excess scripting. The second reason is the cast, who were on the feature before he was to be fair. They add much to the film and its very solid atmosphere (except Jan Rubes, who feels a little out of place and is the films cross as such). They play the piece in the tradition of gothic horror but add to it the slight twist and turns of persons burdened by psychosis. The two come together very well to deploy the claustrophobic relish of the film. This is a delight and both Penn and the cast do well to keep this tension very apparent and very real to the audience. 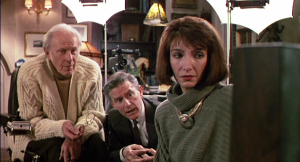 What is more fun however than just highlighting that is to point out that it seems Penn was a fan of Hitchcock. This film is said to have been directly inspired by the 1945 film My Name Is Julia Ross. It should actually be Hitchcock’s film Vertigo. The idea of replacing a woman with a sculpted duplicate and the use of dyes, hair and haircuts to do this smack of the masters touch. I feel it might be like much in gothic horror and be about fear of desire. Hitchcock was obsessed with this and other ‘depraved’ ideas. The constant use of camera and image support this objectification, Mary Steenburgen is made to be a coveted object. This is director Penn at his most clever and his most respectful to the person he admires the most.