Juan of the Dead DVD Review 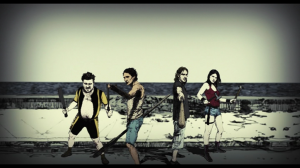 Juan of the Dead follows Juan, a petty criminal, and his entourage of fellow criminals as they try to find a way through a zombie outbreak in Havana. This film never feels like a horror, a reflection of the Cuban-ness, the characters walk through the zombie outbreak barely reacting to anything around them. It is a charming comedy with some exceptional character driven moments between Juan and his best friend Lazaro, a dimwitted but loyal character. Juan and his friends decide to start a business charging people to kill there loved ones, such a entrepreneurial reaction to such horrors is even referenced in the film as being Cuban. A nation that has seen such horrors at length throughout its lifetime. The depiction of a Cuban government who are adamant that the zombies are in fact US sponsored dissidents is poignant quip at a country still living under Castro’s rule. The news reports that everything is fine and that people can return to normal is hilarious juxtaposed with a city that is in complete ruins and the streets are filled with ‘dissidents’.

In the Juan of the Dead is a great entry to the increasingly popular zom-com genre. Its satirical view of a socialist Cuba, but at the same time criticises capitalism. The characters are great, and the general reflection of Havana in the midst of a major crisis is the films finest achievement.