The Return Of The Living Dead DVD Review 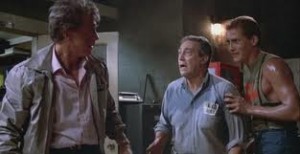 Very few successful writers of box office successes could veer so wildly off track without damaging their reputations but Dan O’Bannon does just that. The Alien screenwriter takes a breath from serious sci-fi horror to enjoy a low budget rampage with zombies in The Return of the Living Dead, one of those 80’s horrors that looks terrible, sounds worse but manages to come together with such a level of tongue in cheek humour that it becomes enjoyable.

O’Bannon’s zombie romp is sound-tracked by the inimitable The Cramps securing its place in punk gorefest history, one of the definitive movies of its genre; it has a suitably contrived set up to boot. When clumsy warehouse workers Frank (James Karen) and trainee Freddy (Thom Matthews) crack open a strange container sent by the US military they are sent choking and coughing to the floor. Little did they know that this mysterious gas has the power to wake the dead, and make them hungry for brains, the two along with warehouse owner Bert (Clu Gulager), crematorium worker Ernie (Don Calfa) and a group of local misfit youths must find a way to kill something that is already dead. How do you do that you may ask? It’s not a bad question Bert.

Clu Gulager shows his zombie-killing chops, though not as insatiably bad-ass as Woody Harrelson in Zombieland, he can still send an undead head flying with the use of his trusty baseball bat. He is the one that keeps a cool head when faced with a growing armada of zombies intent on supping of his cerebellum. The dialogue is deliciously funny, O’Bannon knows full well that this is not a serious affair but with Gulager taking every measure necessary to rid the world of this plague of the undead the laughs come thick and fast. A heavy 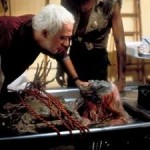 dose of cartoonish violence with a sprinkling of witty jokes mean that this film can be enjoyed by more than just genre lovers, but it will be far more enjoyable without a cinephile stick in the bum.

The new DVD release comes complete with hours of bonus features including a conversation with the maestro himself, Dan O’Bannon, a look at the origins of the living dead with John A. Russo and a discussion about the effects used in the making of the living dead.