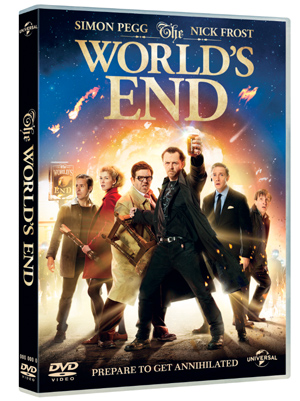 To celebrate the epic conclusion to Britain’s best loved trilogy, on Saturday 23rd and Sunday 24th November 2013 the director and star of SHAUN OF THE DEAD and HOT FUZZ, Edgar Wright and Simon Pegg are reuniting for one weekend to host two exclusive screenings of THE WORLD’S END, where Edgar and Simon will also join fans for a Q&A session and The Three Flavours Cornetto Trilogy (including SHAUN OF THE DEAD, HOT FUZZ and THE WORLD’S END), where Edgar and Simon will be making a special appearance to bring the marathon session to a fitting conclusion.

On Saturday 23rd November, fans will have the chance to attend a screening of THE WORLD’S END at Cineworld Haymarket, two days before the film is released on Blu-ray™ and DVD on 25 November, 2013. Commencing at 8.00pm, fans have the chance to enjoy the final slice of The Three Flavours Cornetto Trilogy, followed by never-before-seen bonus footage screened exclusively for the first time. The evening will also include a live Q&A session with Edgar Wright and Simon Pegg, giving fans the rare opportunity ask any burning questions about the making of the film.

Following this, on Sunday 24th November The Three Flavours Cornetto Trilogy, featuring SHAUN OF THE DEAD, HOT FUZZ and THE WORLD’S END, will be screened back- to-back at the Prince Charles Cinema in Leicester Square, from 4-10.30pm. The movie marathon will be introduced by Director Edgar Wright and star of all three films, Simon Pegg.

We have 2 pairs of ticket to the event on Saturday 24th at Cineworld in Haymarket, 8pm. Please only enter if you can attend!!

The first of the ‘Cornetto’ trilogy was called?