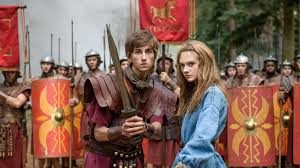 The arrow of time never ceases to move forward. Seemingly that is not only the problem of taste but also the problem of history. We always want to see it anew. See it from a fresh perspective. So here comes HORRIBLE HISTORIES THE MOVIE, to give us the view of history (in this guise, the Roman era of history) from a modern principle. The BBC series, based on the frankly superbly satrical historical books by Terry Deary. They were zippy, well observed, really great pictorial pieces for the child in the adult and the teenager bored of dry academic texts. Its slap stick and sardonic, it is also laconic and dry. Peopled by a vast group of familiar faces, from the UKs endless list of funny faces, funny people and then even an American goddess (of good old Welsh stock no less) to add a bit of razz a matazz. 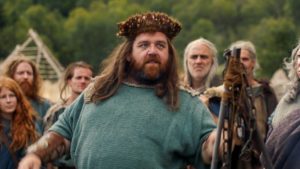 Rome. AD54 odd. Emperor Nero reign is in its birth, after his uncle Claudius (played by former Claudius from the series Derek Jacobi, how meta!). Sadly mummy has the grip of power until little Nero comes of age. AD59 and he is still under the shadow of his Mother but he has respect from his peopel (well fear actually). Atti is a Roman teenager on the make. He is also seen as a soft weight nobody by his father and mother. Small and thin, lacking any muscle or emotionless brawn. So now with his brains in gear, he makes money via a subtle scam. Emperor Nero however is the rube. He wants revenge. Atti is forced to join the army and is sent to miserable, cold, wet Britannia. A stain on the map of the empire…so to speak.The natives are revolting. The Romans are running around fighting shadows and of course the dirt and filth is enough to turn anyones stomach over. 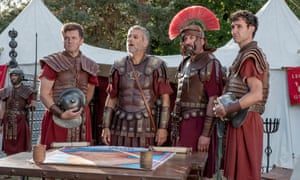 Can I start by telling you the following. I know that we have the CBBC television series that is screened currently, which I am a little impressed by. I also am a fan of the books, from youth to now. Reading them as supplements to dry texts and dull lectures. Finally I was drawn to it and impressed by the cast list, who are very funny in other works. So all of this meant I eagerly asked for the review disc. Now I have seen the response of the main stream and mass media. From the Guardian and the Times, to Empire and Total Film. Mostly poor. Mainly bad and often seen as a poor immitation of a special from the Television series.

I felt it only fair to give this film a chance. The critical mass were not wrong, they pulled out the films many issues. From its comedy, its direction and its subject matter. Yes, It lacks humour, not because as others have said, because of a poor script. More it is played too broad. The jokes are to wide, the comedy is aimed at children but even they would be put off by the forced zingers. The direction is literally haphazard. With comedians not being able to get on with it, they seem to be nudges and niggled. Often the chuckles are lost as the ideas are crowbarred in. This dampens the ideas and then create absurdly predictable set up/ pay offs. The subject matter is the point I differ from. Punches of historical facts are dealt with like the books and are valuable to anyone who listens closely enough. Top and tailed by the production values, which are literally zero but add to the eras realism. So all said. Terrible film but not totally without merit.