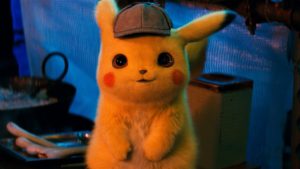 DETECTIVE PIKACHU should be retitled (or should I say correctly titled as) POKEMON : DETECTIVE PIKACHU. From this we can ascertain two important facts. Firstly that this film is entrenched in the Pokemon franchise and comes to it as a part of its world. The second thing is that Pikachu is by far the most popular link between us and it. When it began in 1995, it was doubted  it would have grown to become a global phenomena. However it did, Made lots of money for its creators and Nintendo as well and so the movie studios love a pedigree like this. 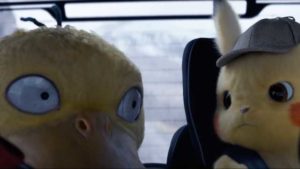 Tim Goodman (Justice Smith) has given up Pokémon training after his mother’s death. He has to travel to Ryme City (where humans and Pokémon live together) to collect his father, Harry’s things after he is killed in a car crash. Tim visits the police station where his father worked and his father’s flat. On arrival he comes across a deerstalker-clad Pikachu that can speak. Well only he can understand him. Thing is Pikachu tells him a story. He has to solve a mystery of what he forgot. A story about secret experiments, ‘R’ gas and that loveable Pika – Pika. 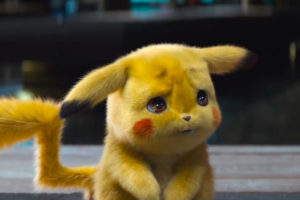 Right then. Let us get this straight. The film seems to smush together the comic characters from the cartoon, Film Noir and Ryan Reynolds personality. There are moments before I watched DETECTIVE PIKACHU, where I was deeply concerned. Then I saw director Rob Letterman was at the helm and I felt…maybe. Maybe. Then I saw the involvement of self confessed, sardonic rift human, Ryan Reynolds and I became convinced. What we get is a well worked blend of film form and Pokemon character legend. DETECTIVE PIKACHU gets it needs to play between the two. 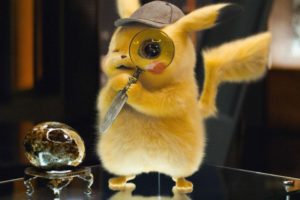 Never confusing eithers conventions, history or importantly form. The blend sometimes pulls off very witty, dry humour. It sometimes executes delightful one liners. Then of course you get the character skills, that are portioned and not crowbarred in. You will not feel that the actions are forced. Or you have been forced into seeing them for the fans simply wanted them to show up. All of that aside, The cute beast that is Pikachu, must never been voiced by anyone but Ryan Reynolds. He pulls off the best thing about the film.