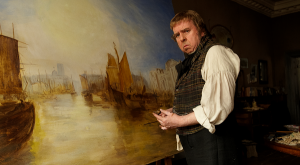 Returning to the fold with his first full-length feature since 2010’s Another Year Mike Leigh turns his gaze onto a British artistic institution, a maverick and a man from whom, since 1984, an annual prize is still named after, JMW Turner.

Starring Timothy Spall as the titular Turner, the film locks its focus on the last quarter of the great man’s life. We see Turner’s curmudgeonly bloody mindedness and his slow physical decay. We see his peculiar wiles and his kindness. We also see his genius. The performance from Spall was rightly lauded at the Cannes film festival earlier on in the year. It is quite the tour-de-force, if a little reminiscent of a cross between Clint Eastwood in 2009’s Gran Torino and Albert Steptoe from the 70s BBC show Steptoe and Son in the gurning, grunting and groaning stakes. Wonderful, all the same.

The cinematography from long-time collaborator Dick Pope (Vera Drake, Secrets & Lies) is beautifully rendered, with a terracotta glow offering a scorched, burnt palette to the images onscreen. The performances from the supporting cast are effected wonderfully too. All of this contributes much to elicit a contagious immersion for the viewer.

At one point, Turner is denigrated with the put-down, ‘…painting your shipwrecks’. It is an emblematic metaphor of the sorry state of his own personal affairs. Audiences will be pleased to note that it is not one that also translates as a marker to the quality of Leigh’s film. That said; as a partial biography, the film skirts detail where detail should have been offered. There is inadequate focus on his relationship (or lack thereof) with his own offspring.

You do get the feeling that Leigh’s admiration for the subject has compromised the fairness of his portrayal. It dances devilishly close to a hagiography. After all, Turner’s faults are painted lightly (pun intended), as the quirk of a wayward savant, rather than the conscious perpetration of misdeed. There is a luxurious and sweeping richness to this work that feels like a glossy ode to a titan of the art world. Not quite the outstanding film that some would lead you to believe, but something of a qualified success.