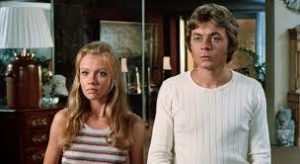 Having seen the ITV production of ENDLESS NIGHT, I was unsure exactly what new details on the story could be revealed by another. Well I have to say that narratively, this is certainly true. The telling is as the source and the source is as unchanged as the wind. It is clearly not about this however, which sends us back to the pool to gaze again at the image before us. Now Sidney Gilliat is one name to draw us in. An English film director, actor and writer. Another draw are the cast. Yes, Hayley Mills and Britt Ekland are there but looky at this. George Sanders, a British film legend. Lois Maxwell, better than the Bond Miss Moneypenny she will always be remembered for. Then of course Hywel Bennett, a grossly underrated actor who starred in a compendium of great films, directed by great people… My favourite is of course TWISTED NERVE…. Whose stars are leads here! 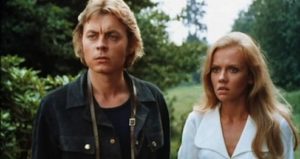 Michael Rogers (Hywel Bennett), is a driver and chauffeur. He starts ferrying rich tourists around London. He dreams of building a magnificent house on a particular spot of land along the Devon coast. While standing in the sprawl of this place, he meets Ellie Thomsen ( Hayley Mills).  Straight after he is offered more work and by chance is offered a trip to Europe and Italy. While there he meets Santonix (Per Oscarsson) a famous architect, befriends him and offers to design the building that will be his new home. Thomsen turns out to be a rich heiress and they fall in love. However, the land the couple purchased is known as “Gypsy’s Acre” and is said to carry a curse. Mysterious accidents pile up, a self-proclaimed gypsy haunts the grounds, and after a midnight accident, Greta (Britt Ekland) moves in with the couple to nurse Ellie back to health, to the resentment of Michael. 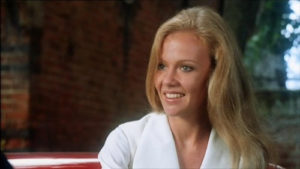 Adapting Agatha Christie’s celebrated novel of the same name, was always going to be a problem. Purists are always looking for a snag and many are here to reveal in. Sidney Gilliat’s final feature is a mixed bag of range, framing and music. He was known for his screenplays for Alfred Hitchcock and Carol Reed, which were trials in tension. Written as much to develop character as action. His direction on GREEN FOR DANGER denoted his ability to export this to the screen. The diffusion of these elements, such as tension and emotion in ENDLESS NIGHT are bold and big. Then I think back to that TV version and I remembered why that failed. It was bilious with emotions. That is what happens here. Underscored (sic) by a bellowing score from Bernard Herrmann. Cinemas greatest composer to be sure. His work here raises an average film to another level, to be sure. However in the end, it lacks the richness of tones, depth and interest for me. 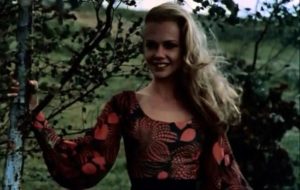 I have never seen this before, so I go by the quality on the projection. Its tonally flat but I think intentionally so. Colour ranges in the Devon countryside is marvellous and this makes it rather worthwhile viewing. 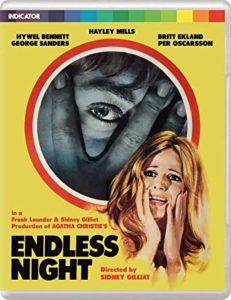 Top 3? Well I have a top one and 50 words on it. John Player Lecture with Bernard Herrmann could only be the choice for film fans and cineastes. He has such a history, legend and variety of stories. That said he also comes across as a consumate professional. Not funny or humourous. Serious and impactful. He tells us his vision over the version. Rare as it is, he also has the depth of hindsight to think about the happy marriage of screen and sound. Wonderful.