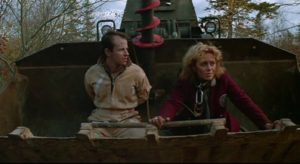 ‘It’s the end of the world as we know it… and I feel fine’ Or so the REM song goes. Sadly the astronauts trapped on a spaceship slowly rotating around the globe after a nuclear war, are not so happy. Jordan (Kate Lynch), Captain Walker (John Walsch) and Howe (Tim Choate) luck looks up. A computer overrides the machine and it comes crashing to earth. Jordan is knocked unconscious on impact. Walker and Howe Try to leave the satellite. However he is killed by some unknown ‘Terminals’. Humans crazed by disease or desire. Now Howe has to choose to leave or stay. 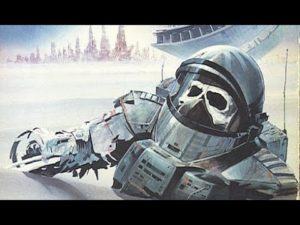 Well I am less a fan of this than I was on the first viewing. This is a shoddy New World release that proved the selling of the company by Roger Corman, destroyed its creativity. DEF CON 4 lacks the clever use of film makers past, often not because the directors and crew have done it, more the budgets are focused on advertising. Its dull often, dire regularly and dismal in the most. Right that said, Arrow have spent the load on this little film and done it a world of good. 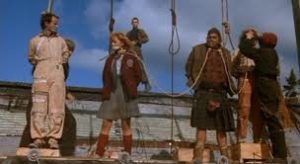 The 2K restoration of DEF CON 4 has not succeeded in lifting the image, grain or colour out of the depths of VHS grime. Some people love that. Be fucked if I know why. Now maybe it is because it is a 1080p presentation but it looks like a pig. The sound is a lot better. I like the fact the sound has been cleared up enough to hear the god awful dialogue. 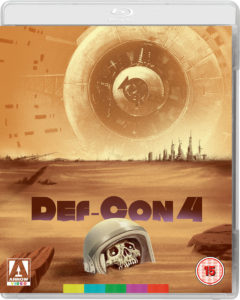 Brave New World, Michael Spence piece is insightful to working at a smaller studio and with limited resources. It also underlines a few issues with cutting on 35mm. New video interview with author Chris Poggiali is a high point. A very high point. It is a fact filled history and then extrapolates the legacy.