Arrow have again been searching high and low for another slice of sleaze and glug. They have leapt through heaps of dirty, grunging flicks in the hope of finding those lost and hidden VHS vault gems. THE ANNIHILATORS is, by that definition ideal it seems. The Vietnam war left masculinity in America bereft. So it is no surprise that returned service men had cammaradire and unity. These men were battle hardened and scarred by the events they witnessed. They were trained to kill but often left on the scrap heap by society. When a former member of an elite battle team is killed in a gang lead murder, a group fight back. Now they are not only taking back the streets but they are ready to fight back against the darker elements of society. Ready to stop society rejection of them and aviod its overall collapse into gangs, drugs and chaos. 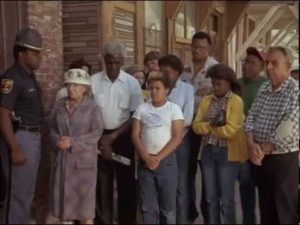 The above seemingly is me trying to make a meal out of a bar of chocolate. THE ANNIHILATORS is like a wet dream for action directors, pulp film fans and I suspect terrible film junkies. Its not a great film by any standard. What we have are a series of ever increasingly ridiculous, but better executed action scenes. From a really awful war opening scene, that is executed solely for the explosion sequence. We then shift and every step leaves nothing to chance. From a shoot out, car chase and then flame thrower cat attack etc. All this is well covered in the The New Heat on the Street feature interview. However the bit that grabbed me was the censorship angle of the early knife stabbing scene. Cut for years until Arrow had it cleared by the BBFC, teh featuire comparion is excellent and defines what is and is not acceptable to the censors. So THE ANNIHILATORS is a silly, excessive action flick with a paper thin plot and half arsed acting. However it is well worth watching if you love 80s pulp or VHS films…