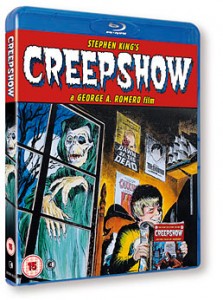 How does one even begin characterise this portmanteau (a term far grander than it deserves) film? Just in time for Hallowe’en, on the movie’s 31st birthday, the powers that be have seen fit to release a Blu-Ray edition, complete with extras.

Daft. There is no other word for it. Creepshow leads the field in daft, by a fair furlong… but. It’s hard to shake the impression that it knows this, and embraces it. Made up of five pulp shorts, each of them cornier than the one before – and a too-brief framing story about a kid whose father overreacts when he finds comic books in his son’s room – Creepshow is nothing new – it belongs to a tradition that includes Dr Terror’s House of Horrors (1965) and 1972’s Tales from the Crypt.

For the pulp horror fan, though, it is too much fun to dismiss. The uninitiated might expect that with Stephen King as writer and George A Romero as director, the film could be a hidden gem. In truth, the film is lesser than either of those parts. The player of Back to Bacon will find it of inestimable value, with its trove of has-beens (Hal Holbrook, E.G Marshall, Viveca Lindfors), will-bes (Ted Danson, Leslie Nielsen, Ed Harris) and B-movie wonder-hams (Tom Savini, Adrienne Barbeau).

The structure is simple: five stories held together by the comic book theme (thanks to King’s nostalgia for Weird Tales, the Creepshow books and their ilk), presaging Robert Rodriguez’s Sin City with none of the accompanying style. In brief: 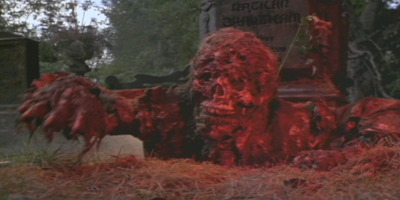 1. Father’s Day: nasty old misogynist returns from the grave to kill his entire family because he didn’t get any cake on Father’s Day a while back.

2. The Lonesome Death of Jordy Verrill: Stephen King tries his hand at playing a luckless simpleton (a sort of proto-Tom Cullen) who finds a meteor in his back garden and, naturally, turns into a sort of Swamp Thing/Jim Carrey’s The Grinch hybrid.

3. Something to Tide You Over: Leslie Nielsen, having discovered that the much-younger Ted Danson is dallying with his missus, contrives to bury him on the beach.

4. The Crate: doubtlessly the dullest of the tales. Henry Northrup (Holbrook) is a snooty academic, married to the loudmouthed, embarrassing Billy (Barbeau). When his colleague discovers a monstrous crate under the stairs at the university, whose contents eats people, he sees a way out.

5. They’re Creeping Up On You: E.G Marshall, once Juror #4 in Sidney Lumet’s masterpiece 12 Angry Men, is reduced to a proto-OCD suffering sadistic scientist cosseted from the victims of his misdoings in a sterile environment that would make HAL-9000’s approach to housekeeping look cluttered and unsanitary. It’s about cockroaches, but chances are most people will have stopped watching by this point.

Yes, it’s daft. King’s performance leads the field in execrability. And yet there is something truly darling about the movie. Creepshow knows it’s crap, and that’s sort of the point. It sets out only to be camp, absurd, cheap and playful, and having achieved that, it may well be one of the most successful endeavours of its time. 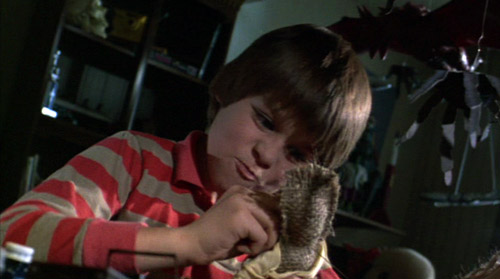