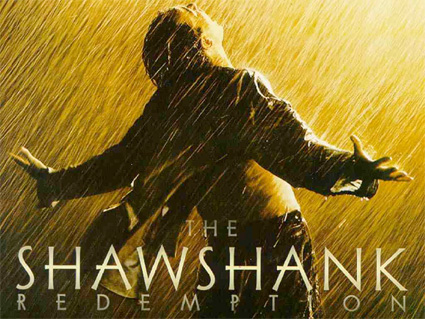 Initially The Shawshank Redemption was a bit of a flop at the cinema, mainly due to its title apparently. Its sounded boring… why would anyone want to go and see it at the local cinema?

Just the opposite happened when it was brought to DVD, The Shawshank Redemption DVD has been the most popular and best selling DVD of all time. The word had spread! Personally i don’t know one single person who give a bad review and for many it is their favourite film.

Its based on the book by Stephen King, and is based on a true story. Its a magical film. The book is good, the film is great and even The Shaw Shank Redemption soundtrack is fantastic.

It is set in 1947 and tells the tale of Andy Dufresne, played by Tim Robbins who is sentenced to 2 life sentences for the murder of his wife. Andy eventually becomes friends with Ellis Boyd “Red” Redding, played by Morgan Freeman. Red is known for acquiring all sorts of contraband and such is a very valuable person to know on the inside. Andy then uncovers a talent of his own and offers to use his accounting skills to cook people tax returns.

This is an extremely good film. The acting is faultless and you become so connected with the characters. If you read any film review new or old i’m positive they will praise it. The Shawshank Redemtion is clearly one of the best films ever made.

Its now been made into a stage show which shows you how popular it is – i can’t say whether it will be up to the standard of the film, but well worth checking out if you’re in London. Check it out here