Alan Pakula is a noted film maker  but one that has often been known centrally for a single film. His better work, has remained in the shadows. THE PARALLEX VIEW, KLUTE and this stunning neo western. There is a moment early on in COMES A HORSEMAN, that defines its neo western credentials. When the brothers are cold bloodedly murdered, they are left for dead without a care or whisper. Its bleak and executed without emotion or embellishment. Pakula has this ability to narrate an event without complicating it with cinematic technique. It is stunning. Powerfully exposing the world that we will inhabit for the next two hours. 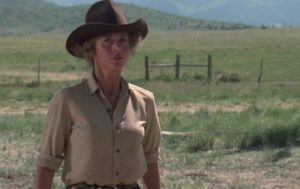 As World War II comes to the end. The heartlands of America comes to terms with the long term legacy. Ella Connors (Jane Fonda), whose family has owned and ranched a fertile valley area of the west for decades has met with opposition. Rancher Jacob W. Ewing’s (Jason Robards) wants her out. His family settled the valley and operated it for generations. He wants to control all of it and preserve it from others. J. W wants to buy out all of his opposition. He has so far succeded. Ella however does not want to. She has a local settled on her land, veteran Frank Athearn (James Caan). Ella sold a small plot of land to pay her bills and cant remove him. J.W.’s henchmen might want to use some persuasion to change both of their minds. So when Athearn is attacked and his brother killed, it is only thanks to cowhand, Dodger (Richard Farnsworth) to save him. Now Ella and Frank have to action a decisive battle between both sides. 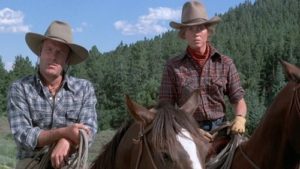 COMES A HORSEMAN reminds one of the John Ford classic westerns. Those that built his repertoire in the 1950s are what I was struck by. The visually stunning, yet thoughtful pieces. Stories about the conflicts in society. Race, post industrialisation, empire and loss. COMES A HORSEMAN does all of this. It is like a river, rolling along and washing onto teh shore all of the debris above. Then it also plays out like a melodrama in the style of GIANT. I found this portion the most refreshing. You expect a Neo Western to dilute genre. COMES A HORSEMAN defuses the bleak premise, emotionless violence and rolling hills with an emotional embrace. It leaves the whole far more profound then I expected. Pakula was a film maker of his time period certainly. One who embraced the anti establishment, questioning, cultural analytical traits write large. He also understood love, pain and the great preamble that is life. 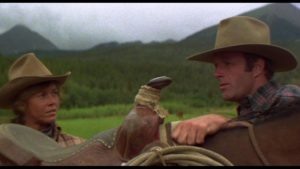 The BFI print is unblemished and colour graded to such a high level that it deserves acclaim. The DVD that ran around and is available online is awful. Frankly awful indeed. The BFI has given us a thing of beauty 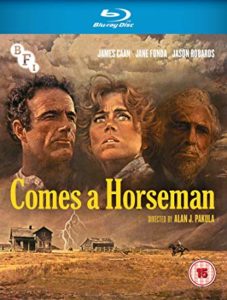 Right let us get to it.

The commentary by Scott Harrison lacks levels. It lives by the idea of the film being an original work inspired by other texts and then riffs off of this. Some points it comes into its own but on the whole its laboured and needs to be more focused on the images and film for me. The best features are the The Guardian Interview: Alan J. Pakula. Listen to the valuable archive of Pakula. He talks freely and in deth with vigour. The most interesting moments are those of other films but its worth it for film fans.