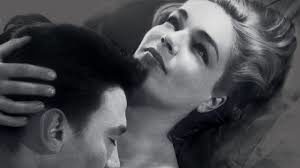 Jack Clayton’s 1959 film is seen as an outstanding translation of the John Braine’s source material, one of the pinnacle of British New Wave cinema and was nominated for six oscars (winning two). All this is high praise indeed but when you think of the film as a remarkable assualt on gender, class and the post war world, you see so much more. Set in a Yorkshire of industry and factories, set against the class struggle of the monied versus the newly growing middle classes. ROOM AT THE TOP challenged its audience to ask questions of society. A stayed country was trying to expel the hangover of the pre war world of class and privilege. Into this world steps young and ideal ridden Joe Lampton (Laurence Harvey), he is a man trying to ascend the ladder of wealth and business. 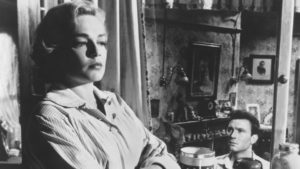 In this age industry and business were seen as the way out of the post colonial era poverty many found surrounded them. When he spots Susan Brown (Heather Sears), he is smitten. The problem is, Susan is the daughter of a rich industrialist. A rich man who rose from the ground and lived at first poorer than sin. When Joe is mocked and rejected, he ends up crying on the shoulder of Alice Aisgill (Simone Signoret). Signoret won the oscar for best actress for this role. Filled as it is with pain, emotion and deep felt loss. Aisgill is an actress, who is in love with Joe. The real problem is that Joe does not love her. The other issue is that Susan might just be in love with Joe. Joe however has begun an affair. One that will have an awful dire consequence. 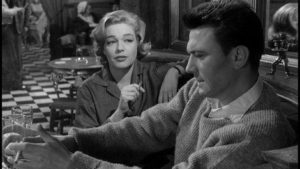 Harvey shines in the role of a man in the throws of success. Playing a callous and eager social climber, who is also bound by a working class phobia of poverty and isolation. He is aided by Signoret and a first class screenplay (which also won an oscar). The screenplay absorbs all of the themes that underpin the piece. Forcing the viewer to never move away from the power of its ideals. Never lacking the dreams of hope, which mixes the dreamlike with the logic of your position. Of an age of leaps and bounds. Many were stuck in their role. 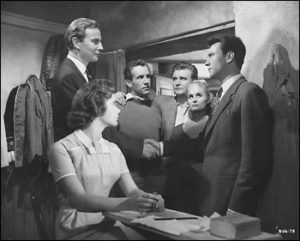 The Blu Ray version has been upscaled to a Hi Def version. This means in plain English that the depth of black and grey is richer, more akin to viewing in the cinema and above all a leap from the standard version. That version looked nice enough to be honest but here its in a whole other league.

Feature commentary by Neil Sinyard (2009) and Dr Josephine Botting (2019) commentaries are both very good. One has been around before (Sinyard) and if you have the old network, then you know it. Filled to the brim with extrapolations on the film, actors and the kitchen sink. It has everything but the sink in the mix. Botting commentary is more focused on the source material, the movement and the role of Clayton. Also his career is covered in detail.