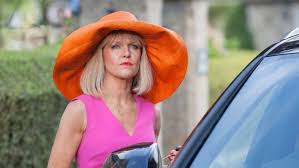 M C Beatons best selling novels have a second season of murderous delights to see us through the nights. Sky One have decided to return the series after a popular first one. After returning from Cyprus and the one (he wasn’t after all) Agatha Raisin (Ashley Jensen) is back to her snooping best in 3 double episodes. She has slipped into village life, with its whispers and gossip, Murder and mystery galore. Assisted by her ex assistant (Matthew Horne) and cleaner (Kay Wix). 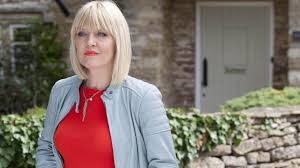 The first double episode is THE WIZARD OF EVESHAM. A tale of secrets, hair styles and sexual tension. It seems that a lead hairdresser has a taste for richer, older woman. So when one dies…well…you can guess.  THE FAIRIES OF FRYFAM sees Agatha on a holiday but one that leads to gruesome murder only after an affair is revealed by Agatha! THE CURIOUS CURATE sees a lovely new Curate, murdered after making one too many friends. Those Curates and their wandering bibles… 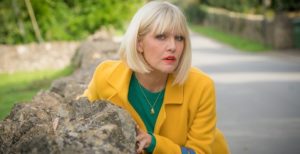 Television murder mysteries have slowly moved from being between prime and daytime to just daytime style television. This has led to some awful additions for the British murder mystery series. However it can sometimes work out. FATHER BROWN proved that done with tongue in cheek, it works. AGATHA RAISIN seems to have learnt some of the lessons. It does do this balancing act, though less skillfully. 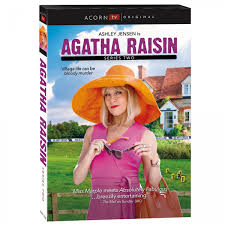 Shifting between humour for us all to enjoy and murderous mystery, it achieves enough to be rewarding. Mysterious and comical. I dont think that the principal player deserves the credit for this. Instead its in the ensemble support, they add the funny and the detail. Then there is the scripting, that its on the nose often and translates a very clever, silly, witty series of books. The translation adapts all of the hues and humour but still maintains enough of the drama to get it across the line. Just.