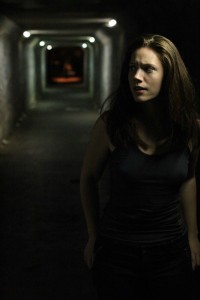 Having recently seen, and really enjoyed, Oculus, I was delighted to be given the opportunity to check out Mike Flanagan’s first feature length horror effort, Absentia. Absentia follows sisters Callie and pregnant Tricia (played by Katie Parker and Courtney Bell respectively) as they reconnect after several years apart, and start living together. Tricia has spent the last 7 years of her life searching for her husband who sits on the missing persons list. Callie’s reappearance gives Tricia the strength needed to put her husband through the process of Absentia, that is the process of legalising pronouncing a person as dead and no longer missing. As absentia gets closer though, Tricia finds herself unravelling, seeing her husband everywhere.

The premise alone made Absentia a film that really interested me. Whilst his sophomore effort focussed on a mirror that haunts its owners, Flanagan’s first film felt like it would explore a very real fear, and a horror that people have undoubtedly had to have gone through. The films first act plays out, almost, exactly as I was expecting, save for an incredibly unsettling scene featuring Pan’s Labyrinth, man of many faces, Doug Jones, pleading for Callie’s help in the sort of underpass we all recognise from our own live. Tricia’s husband appears to her in hauntingly ghostly form, with black holes for eyes and a mouth gawped, grabbing her unexpectedly. These feel as if they are taken straight from Tricia’s subconscious, feeling reminiscent of childhood nightmares.

The films most haunting scene comes as Tricia, having finalised the process of absentia, decides to go on a date with 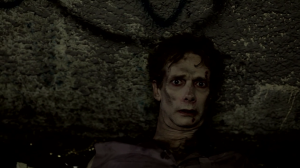 head detective Ryan Mallory (The likeable Dave Levine). I don’t want to ruin it for you as it is quite powerful and one that I will not be forgetting anytime soon. It is a scene that changes the course of the film, and I’m not entirely sure if I thought this was for the best, or if this scene would be more suited as the films climax. Regardless, I felt the third act lacked what I really enjoyed about the first and second. As the film ventured more in to “the unknown”, it started to get more and more predictable. Whilst the end tried to keep you guessing, presenting different versions of the events which occurred and asking you to decide, it doesn’t feel like it completely works.

Regardless, I enjoyed Absentia. Whilst its finale does become a little predictable, it keeps the suspense because by the final act we really care for the characters. Flanagan brilliant builds the characters and their relationship, and as a result the film feels much more complete and effective. The films rugged and rough look may be due to its microbudget, but definitely works in its favour, making it feel less detached from our world, then say Oculus.