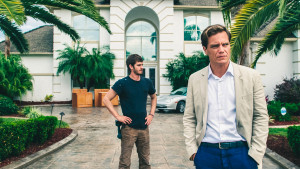 Ramin Bahrani’s 99 Homes is a thrilling and intense drama starring two outstanding performances from Andrew Garfield and Michael Shannon. Based on stories told during the housing crisis in the USA, 99 Homes packs an important emotional punch.

Dennis Nash (Garfield) is a construction worker living in Florida. One day he, along with his mum (Laura Dern) and young son, are evicted from their house by the charming and somewhat terrifying broker Rick Carver (Shannon) and are forced to move into a local motel, filled with others who have also been evicted from their houses. Trying to pick up work wherever he can and get his family back into their home, Nash ends up working with Carver when the opportunity arises but he mustn’t let his family know who he is working for as they would never trust him again. Quickly Carver seduces Nash into his world of scamming the government and innocent families out of their homes. As the rich keep getting richer and the poor are relegated, Nash quickly realises that he can make a lot of money fast by working with Carver – more than he could ever dream of.

99 Homes is filled with electric energy, gripping the audience from the very first scene and not letting go until the final, dramatic climax. Set in a sunny Florida, Bahrani’s camera captures an incredible juxtaposition between the rich in their mansions with their swimming pools and wide front drives and the poor in their developments of box homes. He explores these environments and never judges anyone, instead letting his character roam freely between these locales. The performances from Garfield and Shannon are dynamic and charged – they bounce off of one another and have incredible chemistry. The supporting performance from Dern as Dennis’ mum is also heartfelt and powerful, as all she really wants is for her wrong to be righted and she doesn’t need anything more than that.

Along with The Wolf of Wall Street and The Big Short, 99 Homes is another in a line of films coming out that look to 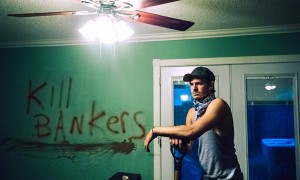 recent events that not only affected Americans but the world over and this is also what makes them so compelling. The history is so fresh in the audience’s mind that their affect is sometimes profound and affecting. What 99 Homes doesn’t have, as seen in other films, is a vein of humour but instead goes down the thriller route and is often more serious than others. It wants to show the repercussions of the characters in the story but also illustrate something on a wider, more important scale.

Fresh, filled with life and so very important, 99 Homes is an outstanding piece of American drama that demands to be watched.

99 Homes is available to purchase here: