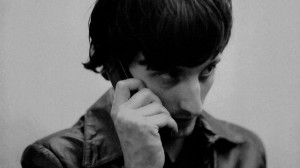 The story these phone calls shape begins with Jake, a young neurotic who is persuaded to leave his small home town and move to the city to live with his friend Sean, a fanatical poet who survives by swindling inexperienced Craigslist customers. When Jake arrives in the city, Sean has disappeared, and as he struggles to secure a job and a place to stay, Jake discovers a nocturnal world of neon poverty in which his friend is thriving.

The film is set amid the starving landscape of recession era America. It documents the current plight of unemployed youth, as well as an aging homeless population, relegated to precarious lives of urban criminality. By relating its generation through mobile phones alone, the film chases the private and public sway of hyper-connectivity in the age of Media.

Director Jay Alvarez said, “This is an announcement of youngness. The movie screams our modern nausea, our florescent nightmare. It speaks for the first time all of the grinding lives spent on one end of electronic data transfer.”

We have a pair of tickets to give away to the world premiere on 2nd October!

What year is this year’s Raindance Film Festival?