Orson Welles’, world famous director of Citizen Kane and Touch of Evil died in October 1985. His last full length feature to be completed was F For Fake, made in 1973. 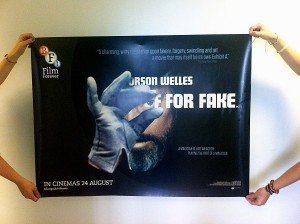 This dazzling disquisition on art forgery, cinematic trickery and magic was an exhilarating blend of documentary, essay and fiction which eludes definition. Welles himself called it ‘a new kind of film’.

F For Fake focuses on Elmyr de Hory’s recountingof his career as a professional art forger; de Hory’s story serves as the backdrop for a fast-paced, meandering investigation of the natures of authorship and authenticity, as well as the basis of the value of art.

To celebrate the new run of F For Fake from August 24th, showing at the BFI Southbank and Curzon Renoir (to name a few), we have 2 pairs of tickets to give away for this brilliant re-release, to see the film at the BFI!

a) Touch of Evil
b) Citizen Kane
c) The Stranger