Win tickets to Lawrence of Arabia at The Empire Cinema, London 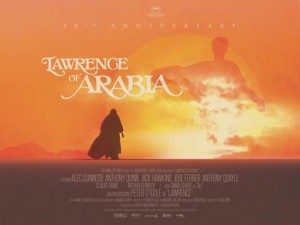 This Sunday 9th December and Tuesday 11th December UK film audiences have the chance to enjoy Lawrence of Arabia in the incredible Screen One at the Empire Leicester Square. A real cinematic event, these screenings represent a potentially once-in-a-lifetime opportunity to experience David Lean’s classic desert epic back on one of the biggest and best screens in Britain.

We have just ONE PAIR of tickets to give away, and all you need to do to bag yourself the tickets is answer this very simple question.

Laurence of Arabia was directed by which director?

With a 1,330 strong cinema capacity and high quality 56K Watt THX certified sound system, Lawrence of Arabia will be showcased in the best possible setting, bringing excitement and anticipation in its original roadshow presentation that features an overture and intermission.

Craig Jones, Director of Film at Empire Cinemas said; “We’re really excited to be able to screen Lawrence of Arabia to celebrate its 50th anniversary. To be able to offer our audiences the opportunity to see this classic film up on the big screen again following its digital restoration is an honour. Here at Empire Cinemas we’re committed to offering our audiences a wide range of entertainment – Lawrence of Arabia is certainly one not to be missed.”

In the year this acclaimed title celebrates its 50th anniversary with a new digital restoration, Lawrence of Arabia was presented to the world at Cannes before going on to screen at esteemed festivals in Edinburgh, Bologna and London, where Omar Sharif attended for a special Q&A session. Released on 23 November in the UK, Lawrence of Arabia has achieved rave reviews across the board with critics unanimous in their praise of the 7-time Academy Award winning classic, winning Best Picture and Best Director in 1963.

Sony Pictures’ Lawrence of Arabia screens at the Empire Leicester Square, Screen One on 9th and 11th December, at 2.30pm and 6pm respectively. There may never be a greater occasion in which to view this film.

For information and to book tickets to Lawrence of Arabia at your nearest Empire Cinemas, visit www.EmpireCinemas.co.uk or call 08 714 714 714.