Top of the Lake Review 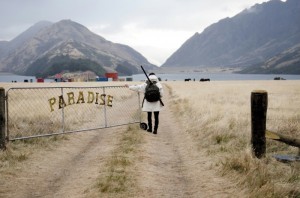 As much gender polemic as police procedural, Jane Campion’s little girl lost TV miniseries/extended film Top of the Lake explores the disappearance of a pregnant twelve year old girl in smalltown New Zealand and the consequences this has on a community tied, fatally, together.

Starring Elizabeth Moss (Peggy from Mad Men) as Robin, a detective who returns home to NZ after a spell in Australia, a visit which whilst primarily meant for her to spend time with her mother struck by cancer, soon becomes secondary to her obsessive commitment to the case of Tui Mitcham (Jacqueline Joe), brought into the police station after she was found up to her neck in the lake, child in tow (the ominous image that starts the series, but stays in the mind much longer.) As Robin delves further into the case, into the town, and into her past, she becomes increasingly embroiled in proceedings and the case becomes more a psychological trial than an assignment. As Campion rather unambiguously states “it takes her by surprise to realise the lost girl is also herself.”

This personal struggle, against the town and against the men who orchestrate it, sees her facing up to all sorts of emotional states, anger and hurt as much as love, as she encounters Matt Mitchum (a towering Peter Mullan), father of the girl and druglord town ringleader, Al Parker (David Wendham), police chief and one sided suitor and Johnno Mitchum (Thomas M. Wright) a past flame and estranged son of Mullan’s drug baron. The accountability and morality of all of these individuals and the rest of the townspeople come under question as Robin digs deeper in the hope of saving Tui, and in a way saving herself.

Its a gripping narrative that is best left described to a minimum, and the six hours becomes a breeze. Whilst prone to a little too much in the way of back and forth twists and turns, particularly in the third act, there are some stunning developments, including one moment in particular where the staging, writing, cinematography and stuntwork comes together for jaw-dropping, mountaintop effect. Despite beginning as a simple police procedural, the show morphs and twists across genre and tone in a way that keeps it interesting and unique. This fluctuation includes an odd subplot involving a woman’s retreat camp led by a white-locked psychic played by Holly Hunter, which despite serving no real purpose, is constantly returned to and connected, ever more tenuously to the main story. Even Matt Mitchum finds himself party to the retreat, as he has a short fling with one of the women there, including a segment where the two of them drop ecstasy and roll in the grass for 10 minutes or so, which serves to illustrate his vulnerability, could be cut at no loss. These episodes, whilst superflous, constitute the benefit Campion and Lee have with a long-format, there is time for characterisation and exploration, and by the end, the picture of the characters is nuanced and broad, and the vision of the town far reaching and well realised.

It’s a series driven by psychologies and emotional states and stakes, and as such the strength of the performances are important. Thankfully, Campion and Lee’s cast are carefully selected, even if the strength of accentwork might not have been the deciding factor, Moss playing the sort of fragile but immensely strong detective that fan’s of Homeland and The Killing will recognise. If anything, her character is more balanced that these two comparable resolution-at-all-costs female detectives, less of a prenatural force of super-policework and more of a conflicted, vulnerable but no less strong woman. Peter Mullan as the horrid, fiercesome, yet similarly damaged patriarch is sensational, further proving that he is one of the strongest and most underutilised actors working currently. The children too are solid, Jacqueline Joe’s Tui conveys a lot whilst saying little, as does her mostly mute friend and perfectly captures the mixture of innocence and maturity present in pubescent girls. Early on, shots of her. on horseback with rifle in hand, could become iconic images of young female power.

Yet despite this cast and plot, the scenery is perhaps the strongest presence in the series. If ever a landscape could be considered a character it is here, the misty surface of the lake, openness of the expanses, suffocating closure of the forests, and infinite span of the mountains serving at atmospheric visual leads to intonate the tone of the drama. Campion perverts the natural beauty of New Zealand, imposing a darkness on the wintry landscapes.

Set in the Queenstown area, a mass of breathtaking mountain vistas and glacial expanses, Top of the Lake combines the atmosphere of European crime dramas, (things like Silent Witness, Waking the Dead, and most notably Forbrydelsen, known better as The Killing, of which it shares more than a missing girl plotline and a female detective protagonist) with elements more familiar to New Zealanders (shipping containers – a icon of post earthquake Canterbury, skinny flat whites – also an icon, of Antipodean coffee conversation culture, even the missing girl, Tui, shares her name with the island’s national bird.)

But most Australasian perhaps, is the gender structure of the show. There is an awareness of division and repression, and an understanding (perhaps unsurprising with Campion – who has always has feminist themes in her work – as its anchor) of a pervasive sexism inherent to almost every inter-gender transaction, social or professional. Beyond the social gender divide, ladies chatting on one side, men tending to the bbq on the other, expected in Australasian, Top of the Lake has social gender critique embedded in its narrative. As the story moves from police procedural, to individual psychological portrait, to small town cross-section, the one thing that remains a presence is the gender angles Campion imbues into every aspect of the story and level of the social heirarchy of the town.

This gender battle manifests itself frequently. In the pub sections, the lone Elizabeth Moss character fighting to hold her own amongst mobs of greasy, sleeveless denim jacket wearing, aggressively machismo types, to the extreme that she pointedly (no-pun-intended) throws darts in the chest of a male antagonist, who equally pointedly, puts on a face of impassive bravado. In the workplace, the atmosphere is not much different, as single female detective and child abuse specialist, Moss finds herself leading the investigation but struggling to be heard and taken seriously. The rest of the force are painted as either bumbling or corrupt.

Indeed, throughout Top of the Lake‘s six hour run, there is a notable lack of sympathetic male characters, not that this is shortsightedness on Campion and Lee’s part, but a pointed depiction of male ineptitude, barbarity and corruption throughout all of the ranks of society. The only adult male even close to being likable spent 8 years in jail learning how to get there. In fairness, the female characters, whilst sympathetic, are all heavily flawed too. The children in Top of the Lake are the innocents, neglected, misunderstood and exploited.

Blunt it may be, these undercurrents make the drama more interesting, and somehow the stakes higher, a sense of brooding gender warfare bubbling beneath the overlay of missing girl dramatics. Tui’s struggle and disappearance becomes something greater than an individual case, and Robin’s involvement a real personal battle and psychological struggle. Campion and Lee keep it interesting over six hours, and despite variation in tone and quality in the middle, the moody, sombre first act is pitch perfect, and the final act as explosive as any fan of twist-led serial drama could require.

Viewed in it’s entirety at the BFI. Top of the Lake will have a run on BBC2 starting July 13th.