Angelina Jolie has not had the best of times recently. Scathing emails leaked through the Sony system hack, plus early lukewarm reactions to her debut directorial effort, Unbroken. It’s all been a bit of a bumpy pre-festive period for the star. Now that it has hit British cinemas, are the criticisms to Unbroken fair and reasonable? Well, we would probably offer a cautious, qualified yes.

This is a feature charting the true story of Olympic athlete, Louis Zamperini (played by Jack O’Connell); an Italian-American who was enlisted in the WW II effort on behalf of the Allies. After suffering a devastating set of circumstances, he was not only lost at sea for an elongated period, but ultimately captured by the Japanese. What became of him?

First things first, the screenplay is a bit of a muddle. By being intent to open with an action-packed segment, the cacophony of war is pulled into frame from the get-go. Consequently, the story has no option but to flit wonkily back and forth between peacetime idyll and war time embattlement. It all feels a bit jumbled and chaotic.

Plus, the desire to give the story a forward momentum leaves scant coverage for many of the peripheral characters. There is a hurried feel to proceedings, at least until we finally reach the patient section where the soldiers are lost at sea. It is at that point, with inevitable comparisons with Life of Pi, or the more recent All is Lost, raise their head in and amongst the latter stage evocation of The Pianist and The Railway Man.

The story is affecting and the post-script illuminating. Jolie has commandeered a sturdy tale, which she has told with the requisite nuts and bolts of the cinematic grand sweep. A rich, sumptuous soundtrack and a sunshine cinematography all ooze a golden, classic Hollywood glow. This isn’t a gritty, Ken Loach-inspired take on the war effort and the trials of man. 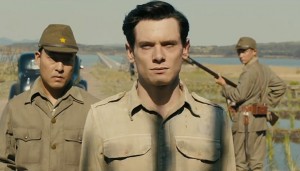 In the process of committing devoutly to the tried and tested, a fresh voice on an exhausted genre is left devoid of any clout or imprint. Call it derivative, call it what you will. What matters is the impact and the impact here is like trying to inflict a bruise by punching a target through a pillow. Add to that the flag waving jingoism that is never too far from the surface and you have many reasons to quibble.

With that said, this is certainly a reasonable film and perfectly adequate. Some scenes resonate very well indeed. It’s just a bit of a Curate’s Egg over all.