If cineastes are aware going into The Silent House (La casa muda) of its makers’ claims to have shot the film entirely in one take, they might be surprised to see an editing credit (given to Gustavo Hernández, who is also the film’s director) in its opening credits. If there aren’t separate shots and scenes to cut together, surely montage isn’t required. Like Hitchcock’s Rope (1948), though, the achievement here is to given the illusion of the single take; there are several instances here where on-screen darkness could allow for an invisible cut. Even so, the result is an interesting if not always successful film. 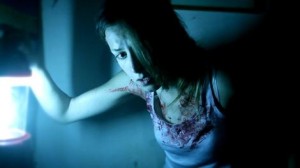 As its ordinary title suggests, The Silent House makes a virtue of the “old abandoned building” kind of horror, stripping it to its bare essentials and adding a visceral edge by limiting its light sources and shooting in handheld HD. When Laura (Florencia Colucci) and her father Wilson (Gustavo Alonso) arrive at their friend Néstor’s (Abel Tripaldi) neglected, now-empty home to stay there for the night, they are each given a fluorescent lamp, that will help both them and viewers navigate the otherwise lightless house. There is also a radio present, its sounds filling a void, and when characters are in a different room it helps give a sense of space to the place.

Unlike The Blair Witch Project (1999), though, this film also enjoys the liberty of more traditional genre elements, such as the musical score that lends tension to those moments when things are about to go bump in the dark. And because shooting in a single take means action unfolds in real time, it isn’t long before Laura hears feet rustling and furniture being shifted upstairs.

The early suspense is handled well. Naturally, only Laura hears suspicious sounds upstairs; Wilson – fast asleep – shrugs her warnings off. When Laura finally persuades her father to check the goings-on (“This is what we’ll do,” he tells her, “I’ll go and check and when I return I want you to be asleep”), bad things begin to happen.

It’s when bad things begin to happen that the film becomes more interesting and yet more erratic. When Wilson goes upstairs, for instance, the camera stays with Laura; we aren’t given the benefit of seeing both. So when we hear something terrible happening off-screen, we’re made to stay with Laura as she weighs up what to do.

Because this is a feature film and not a short, what follows is often a case of “padding”: Laura spends so long being curious and investigating her immediate surroundings – even when there’s clearly a homicidal maniac in the house with her – that the film demands suspension of disbelief. Between its moments of actual action, our minds – like the camera – are allowed to wander.

(Spoilers ahead…) The Silent House has a twist. For all its realist foundations and the lengths to which director Hernández and cinematographer Pedro Luque have gone to make this a gruelling exercise in point-of-view tension, it becomes in its final moments a psychologically fractured narrative wherein its previously unseen killer has been an imagination…

A sexual history between Laura and Néstor is revealed, that makes us question whether the latter has been causing the noises upstairs all along; brief glimpses of a child shuffling from room to room in the background of shots, recalling Don’t Look Now (1973), delay clarity and add a mild if conventional absurdity to events. Another scene involving flashes from a Polaroid camera in an otherwise blacked out room – lifted straight from the first Saw film (2004) – suggests Néstor is indeed the killer.

But then in the film’s finale, the camera shifts focus and takes on the literal point-of-view of Néstor, as Laura reveals she has killed her father before proceeding to kill him. It’s not the kind of twist that explains everything that has happened before, but only confuses it. The main reason it doesn’t entirely work is because the camera hasn’t left Laura’s point-of-view for sufficient enough time to allow for the possibility that she has committed these crimes – and, like Michael Myers, has also gone to the trouble of tying her victims up and propping them up in various places for others to find.

There is a post-credits sequence that seems to go on forever. After we have endured it, the film returns to its opening claim of being based on real events (which we’d long forgotten about). Inconclusive evidence meant that the case in real life was closed; Laura was never found, we are told. These final words carry the obvious implication that the film’s makers have exercised much poetic license, then, given that they’re quite clear as to whom their killer is. It makes you wonder what could have been, had the film’s character psychology been consistent enough to match its deft photography and early promise.