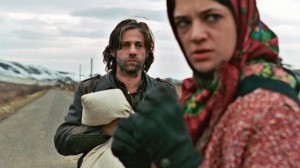 Transylvania, the closing film at Cannes 2006, is a meandering road movie with energy to burn and music to cherish. Written, directed and scored by Tony Gatlif, the film follows two lost, grudgingly dependent souls whose respective fortunes pit them together in the sparse but beautiful landscape of central Romania. It is reissued on DVD by Peccadillo Pictures on 11 February.

Zingarina (Asia Argento) arrives in the eponymous region with best pal Marie (Amira Casar), in search of lost love Milan Agustin, a multiple musician who was deported from France two months previously. Pregnant with his child (she draws in felt tip a foetus on her belly), Zingarina is dogged in her pursuit, though when Milan is eventually found he reveals that his departure was voluntary. Shattered, Zingarina screams during a street parade and gets drunk that evening; the following day she cuts Marie loose after assuming short-lived responsibility (or figurative motherhood) of a beggar child named Vandana (Mariana Rus).

Soon after, Zingarina meets Tchangalo (Birol Ünel), a man with whom she had a brief encounter the previous evening. A casual relationship ensues, aided by an enchanting roadside picnic lit by a chandelier powered by overhead cables. Roadside sex – interrupted by a wild bear – follows, as the unlikely couple journey into a countryside whose snowy hills suggest a literal winter alongside an emotional purity. After Zingarina endures a roadside labour and is taken in to recover with her newborn by local residents, Tchangalo assembles a band of gypsies to play music for him while he smashes one bottle of downed beer after another over his head. Continuing his binge in a nearby bar, he experiences an epiphany with regard to a possible future with Zingarina…

Such details aren’t so much spoilers here as descriptions of Gatlif’s overall aesthetic approach: Transylvania is a film in which rapid scenes, jump-cuts and handheld camera-work (from Céline Bozon) evince an eternal instability on the part of Zingarina and, by extension, Tchangalo. Tonal shifts are cued effortlessly by the music itself, whose diegetic switches suggest that in Transylvania itself, there is a song for every emotion and that music sits at the centre of people’s lives (“music is for life”, says one character late on).

Amidst this sincerely hectic sideshow are intermittent moments of sustained splendour: drowning/embracing/exorcising the pain of being ditched, Zingarina dances with inexhaustible recklessness to Palya Bea‘s “Tchiki Tchiki” while smashing plate after plate ontot he dance floor (prefiguring Tchangalo’s own solo, empty beer-bottle routine); her birth scene, meanwhile, begins to take on a gruelling component suggestive of horror (is that an imaginary knife being held to her throat…?); Zingarina’s reunion with Milan plays out twice, first as an almost sublime, impossibly perfect projection, then as a humbling reality-check evoked by a dropped mug of coffee (a recurring motif here is that objects and people are suddenly dropped on impulse), a technique later employed when Tchangalo begins to ponder his feelings for Zingarina.

Otherwise ordinary, perhaps, in its wildcat take on amour fou, Transylvania is given a strange emotional intimacy and folksy otherness through its music, setting and performances. As casual tradesman Tchangalo (“I’m looking for gold,” he tells Zingarina upon first meeting her), Ünel anchors a wayward traveller for whom life amounts to a succession of piecemeal business exchanges. The actor has a face seemingly made for the cinema: resembling Frank Silva’s Killer Bob (from TV’s Twin Peaks) cross-bred with a more thuggish Bob Geldof, Ünel has been criminally underused by European cinema’s wealth of experimentalists. Opposite him, though, driving the film from start to finish, Argento is a typically intense angel of self-destruction. As Zingarina (“I’m looking for love,” she tells Tchangalo), the actress is highly effective as a reluctant romantic whose heart has been desperately if not irrevocably misplaced.

‘Transylvania’ is released on DVD by Peccadillo Pictures on Monday, 11 February 2013.