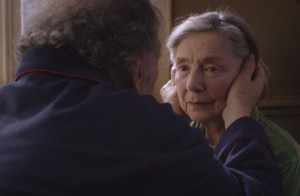 In the opening moments of Palme d’Or-winning Amour, a front door is kicked in and an apartment is entered. It is the film’s first intrusion of several: hereafter, a gradual increment of unwanted guests haunt its space. Some of these are actual (visitors’ unannounced calls), some are suggested (evidence of an unsuccessful break-in), some are imagined (a nightmare). The two mutually-bound intrusions that ultimately give the film its painfully detailed claustrophobia, however, are the camera that never leaves the apartment and the physical and mental deterioration of one of its two inhabitants.

Amour is the latest work of critics’ darling Michael Haneke, and depicts the daily routine of Georges (Jean-Louis Trintignant) and Anne (Emmanuelle Riva), an ageing couple of retired music teachers whose otherwise contented existence is turned on its head when the latter suffers a stroke that paralyses her entire right side. Promising his beloved to never allow her to return to hospital, Georges agrees to take care of Anne: to cook for her, transport her from one room to the next, exercise her, and so on. The duo braves and learns to adjust to the situation, which is both alien and humiliating to them, but as Anne’s condition worsens and she suffers another stroke, Georges’s task becomes increasingly burdensome. Slowly defeated by Anne’s dementia, Georges comes to resent any visits, not least those from daughter Eva (Isabelle Huppert), whose legitimate concerns are met with a selfish if understandable need to reserve one’s dignity.

Before anything else, Haneke is a master of mise-en-scène. Making his protagonists’ Paris apartment look and feel lived-in is no easy achievement; though the camera remains immobile for large sections of the film, the apartment’s topography becomes familiar to us as the film progresses, its sound and production design immaculately evoking a creaky, expensive abode lined with books and that projected sense of hard-won success.

The film is both a continuation and a departure from its brazen auteur’s previous work. The majority of Haneke’s films have at their centre a white petit-bourgeois couple named Georges and Anne, of course, while thematic currents channel earlier films such as The Seventh Continent (gradual descent into incomprehensible despair), Funny Games (hostile threats from outside) and Hidden (insularity and stubbornness in the face of unexpected danger). Amour unfolds with the same brutally unforgiving veneer as these films: silences are sustained and compositions held for as long as they need to be – which is often appreciably longer than we’d perhaps like – which give the film a compelling rhythm and a serious tone even during those Woolfian passages in which we simply observe a series of empty frames of the house or of the paintings that adorn its walls. There are welcome aesthetic and artistic deviations, meanwhile, in the form of a warmer visual palette that recalls early 1990s Woody Allen (cinematographer Darius Khondji has also worked on Allen’s more recent films), and in the suggestion that life has its joys as well as an inevitable end – there are brief moments of humour here that seem to stem from a plausible chemistry between the two lead performers.

Regrettably, such joys remain suggestions, and Haneke’s vision appears to be as bleak as ever. Enjoying his unwarranted reputation as Europe’s most serious filmmaker, he’s cleverly and pugnaciously titled his film “Love”, which in French phonetically suggests “a mort” – i.e., Death. That’s the overriding concern here: a painstaking view of a slow, debilitating end shared by two people. The film might be an empirical confirmation of a monologue delivered by Ray Winstone in 44 Inch Chest, about what love really means: sparked by the remnants of romance, it’s more to do with embarking upon full-time care of your partner as she wets herself, is unable to eat, drink or bathe unaided and is, finally, incapable of articulating herself.

This is necessarily difficult viewing driven by powerful performances from Riva and Trintignant. Each could reasonably be an older version of the equivalents in Funny Games or Hidden. Both undergoes a physical change over the film – hers is more obvious, but his is just as effective, evincing the realities of old age with facial and bodily nuance. One scene sees Georges sack a second nurse whose services he has only recently asked for – the rude manner in which he does so is incredibly complex, and her own anger is palpable and valid.

Unfortunately, such encounters are few and far between, and Haneke seems to have made certain conceptual decisions that have made his portrait a comparatively easy one. In making his protagonists wealthy enough to withdraw almost completely from society, Haneke ensures his film needn’t bother itself with the ongoing socio-economic crises that are plaguing his continent at present. While Hidden, arguably his best film, aspired to preposterous analogies between Eurocentric colonialism and an act of violence committed by an unthinking eight-year-old in such a way as to disguise its own fallacies, Amour is a literal retreat from a wider social fabric. It’s not essentialist in the same way as Sokurov’s Mother and Son (1998), but it’s still noticeably removed from any more pressing social concerns. Of course, any artist should be free to work on any theme they choose, but Amour‘s critical reception at Cannes this year is frankly indicative of intellectual confusion.

Furthermore, Haneke is still adamant in imbuing a sense of genre intrigue into what should be (and, to be fair, is) his most sincerely heartbreaking film: beginning the film in the way that he does – Anna is found dead, laid out on her bed as if at a wake – lends it a mystery and something resembling dramatic irony, neither of which are needed. This comes off as disingenuous, while self-reflexive nods to his own audience – the film’s second shot is of a packed theatre of people attending a piano concert, framed like a mirror image of those watching the film in a cinema – appear by this point to be childish and tired. Though there are shifts towards a brand of filmmaking that can finally be taken seriously here, Amour continues its director’s singularly chilly – and apparently winning – view of the world. Where else, we must finally ask, is an apparently self-loathing member of the petit-bourgeois intelligentsia to turn at this point in his career other than to a prolonged death?