The Legend of Barney Thompson Review 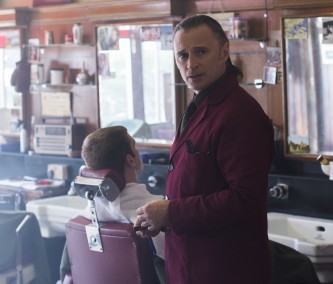 Sometimes, a debut feature-length directorial effort can be too in thrall to the maker’s influences to really stand out. Unfortunately, Robert Carlyle’s debut work falls into that rather disappointing category. The Legend of Barney Thompson is many things, but of its own mind is not one of them.

In Glasgow, a serial killer is on the loose. Ray Winstone, a cockney copper, is a fish out of water thrown into the departmental politics of an embattled, yet also incompetent, police force who are flapping in their attempts to foil and apprehend the killer. As things stand, all they seem to unearth is another gruesome body part sent by mail to various recipients.

Meanwhile, matters focus on the musings and fortunes of the short-tempered, but otherwise unremarkable, hairdresser, Barney Thompson (Carlyle). Increasingly ostracised in the workplace, this is a look at how an ordinary life can suddenly get twisted and take a dark turn.

In the background, a delicious performance is offered by Emma Thompson, who plays Barney’s mother, in a character that is the very antithesis of her take on P.L. Travers in Saving Mr. Banks. She poses with pursed lips, cigarette at the ready, and endowed with the mouthy vernacular of a road-rage incited lorry driver.

Overall, this is a surreal drama that brandishes its influences a little too readily; it’s there in Tarantino cocktail of mixing surf guitar music with the kitschy lounge-style offerings of someone like Engelbert Humperdinck; it’s there in the Guy Richie-esque collision of colloquial exchanges with contrived one-liners; it’s there in the slo-mo sections that could even be Scorsese’s Mean Streets relocated to the mucky streets of Glasgow and labelled with an ASBO. 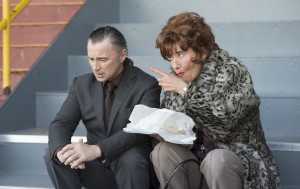 All of this begs an important question; when does an influence turn from a catalyst for inspiration to out-and-out mimicry? It’s down to the utilisation, certainly. But the conclusion that probably needs to be offered is that this would not be all that important if the film’s narrative felt fulfilling. The mechanics would fall away and pale in comparison to the engrossment afforded through the film’s substance. Instead, the distraction becomes bigger as the attention increasingly wanders.

As the nefarious set-pieces play out, there is a mix of Wheatley’s Sightseers­-meets-Volver-meets-Pulp Fiction-meets-Snatch. And yet, it’s not as good as any single one of those films. It is a pity. Even the fairground section reminds one of the climactic Strangers on a Train scene.

All in all, Carlyle’s celebration of his film collection has manifested itself in a bit of a Curate’s Egg. If he can reign in the props to his heroes, he might find his own voice. The performances lift a stilted narrative out of the doldrums, but only just.