Into The Woods Review
Home
Reviews

Into The Woods Review 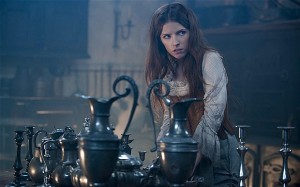 Into The Woods is a beautifully put together, atmospheric fairy tale, a magical feat in musical storytelling and features an all star cast led by the seriously awesome and very award worthy Meryl Streep. Directed by Rob Marshall (he who did Chicago & Nine), and based upon the music and lyrics by Stephen Sondheim, Into The Woods carefully balances the fabulous, the funny and the truly terrifying in a spectacular way.

Like an acid mash up of all the fairy tales you were told when you were younger, Into The Woods expertly crafts a story (in two succinct parts) weaving a variety of characters and plot lines together. From Cinderella (the dazzling Anna Kendrick) and her stepmother (Christine Baranski), to her Prince (the hilarious Chris Pine), Little Red Riding Hood (Lilla Crawford) and the crafty killer wolf (Johnny Depp), Jack (of the beanstalk variety) (Daniel Huttlestone), his mother (Tracey Ullman) and the Giant that comes for revenge (Frances de la Tour) to Rapunzel (Mackenzie Mauzy) and finally, the Baker (James Corden), his wife (the stand out Emily Blunt in possibly her career best) and the wicked wicked witch (Meryl Streep).

The story, which begins the chain of mad events is the Witch telling the Baker and his wife that the reason they haven’t been able to have a baby is because she had put a curse on their home when the Baker was younger. She had caught the Baker’s father stealing from her, specifically some magical beans, which drew all her youth and life away from her. But she realises (in a moralistic fashion) that the Baker is indeed not his father and if the pair want the curse lifted, they have three days to collect the following items, “the cow as white as milk, the cape as red as blood, the hair as yellow as corn, and the slipper as pure as gold.” Of course it doesn’t take a scientist to realise these are all parts of the various other fairy tales in this world and here begins a clever and adventurous nosedive between stories. 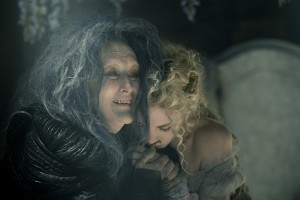 the Baker will find everything for the Witch.

During the course of their adventure, the audience are taken through the other stories that are happen concurrently. Cinderella must go to Ball, which lasts for three nights in this tale and once she is granted a beautiful dress by the spirit of her mother in the tree, she goes straight to the first night. For both the first and second night, the Prince runs from the castle in pursuit of her but it isn’t until the final night that she leaves the slipper behind in the hope that the Prince will find her and take her away from the wicked Stepmother and stepsisters. Pine’s Prince is one of the stand out characters of Into The Woods, he is over the top and theatrical, gesticulating madly and really performing as if he were in a pantomime, but it seriously works. During one song in particular, ‘Agony,’ he sings of the pain of finding this girl and fulfilling his role as the charming and good looking prince – it’s satire if there ever was.

There is a very clean and concise break in the film (as it were on stage between acts) where the first story seems to come to an end – everything turned out the way it was meant to. But during the darker and sadder second half, everything falls apart. It isn’t until the attack of the Giant that the characters and the audience realise trouble is brewing. The characters must come together to attack their opponent and try to save themselves and everyone else in the village. It is during this second half that Corden really shows off talent as a lead; he works a range of emotions as his character is truly put through the motions. 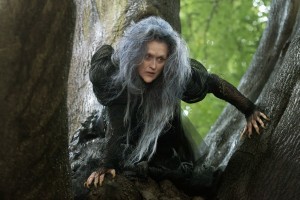 The music, as with a Sondheim musical, is great. It keeps the audience tapping their feet as they go along and for those who haven’t the stage version, it doesn’t expect you to have either. Marshall in particular is great at bringing an entirely new audience to a story and making them fall in love with the characters. But a great big set of musical jazz hands and applause has to go to both Meryl Streep, who goes from scary, to sad, to funny all within one sentence and Emily Blunt who lights up the screen whenever she centre stage. Both their songs and their speeches are memorable and they both work to really push the story forward.

A fun filled film and certainly something here for everyone, Into The Woods is a great big ball of delight.