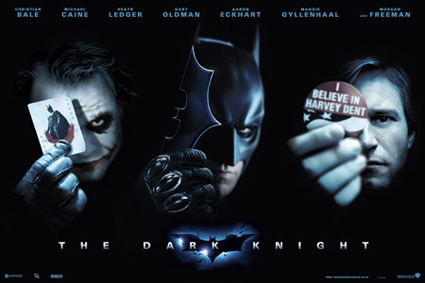 Quite simply this is the best superhero film of all time. The first Batman film from Christopher Nolan, Batman Begins (2005) was a masterful re-telling of the classic hero and set new standards for the superhero genre. With The Dark Knight, Nolan has raised the bar even higher.

This film is set about a year after the first with The Joker now being the arch enemy that is plagueing Gotham City.

The cast of this film is incredible. Usually with such a huge cast of well established actors it is a tactic to cover up a poor film but not here. Everyone does their job excellently. The lengendary performance from Heath Ledger as the Joker will never be forgotten. Aaron Eckhart too as Harvey Dent plays an fantastic role as the district attorney with big plans to clean up the city. Gary Oldman returns as Lieutenant James Gordon, the only one inside the corrupt Police force that Batman can trust.

If you think of all the things you’d like to see in a superhero film – this has all of them. Amazing action, plausible gadgets, excellent acting, deep story line and appropriate comedy. It delivers, and delivers them in a classy and professional way. It seems Nolan has really got his teeth into Batman now and i fully expect him to make another in the near future.