If you, like me saw the teaser trailer for this a year ago, you were both excited and intrigued. Unfortunately the film is a case of ‘you got your Steven Spielberg in my J.J. Abrams’. It plays out like two films that were shy of the prerequisite 90-minutes for a feature film and were then mashed together. 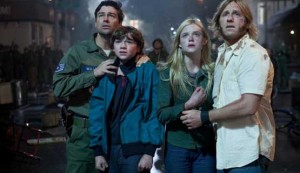 The story, set in a small American town in the late 60’s, follows Joe Lamb (Joel Courtney), who’s mother has just passed away and his group of friends who are making a zombie movie for a local film contest, enter Alice Dainard (Elle Fanning) who joins their film’s cast, they witness a train wreck, the town starts getting weird, and the military come to ‘clean-up’, Joe’s dad, a deputy (Kyle Chandler) tries to find out what is going on.

The writing is inconsistent, one minute your chuckling to some witty banter the next the characters become frustratingly repetitive, the word ‘mint’ is used countless times in a very short period of time. About half way through the film the dialogue has become the same clichéd lines used in the majority of these types of film. The score is definitely a hybrid, one minute your hearing music very similar to Lost, then music similar to every Spielberg movie that isn’t historical. At least camera work is sharp, often floating on characters creating an uneasy sense of reality for their situation.

There are, however, positives, J.J. Abrams knows how to direct a creature feature, sandwiched between the warm-hearted Spielberg family adventure is a pretty good monster movie (final act not included). The mystery is there, and the monster is hidden in a manner that frustrates any audience members who do not have an eye for detail, some argue this is a bad thing, but it’s J.J. Abrams style, and you know what your going to get. It is also evident that Elle Fanning is a very talented young actress, expect to see a lot from her in the coming years, she somehow managed to make a poorly written character much more interesting. Overall, the film can be summarised as ‘what if E.T was actually a bit of an asshole, the Goonies are there, but for some reason this is being directed by J.J. Abrams so it sort of feels like Cloverfield‘.

When J.J. Abrams was announced as the writer/director, along with the teaser trailer, many fans were excited. Spielberg’s involvement was evidently detrimental to the film, his stylistic touches and clear meddling can be seen throughout the film. Just remember “Drugs are really bad!” because this films ending will leave you wanting them.