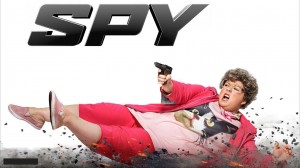 Paul Feig is back. And like with Bridesmaids and The Heat, women head up his new caper Spy. Melissa McCarthy teams up for a third time with Feig and is once again in top form.

Spy is an action-comedy that stays away from being a spoof of a James Bond film. It’s no Airplane. After a group of CIA agents’ identities are compromised, desk-bound analyst Agent Susan Cooper (McCarthy) steps up to the plate to go undercover to infiltrate the world of a deadly arms dealer and stop a global catastrophe.

The Seattle International Film Festival chose Spy as their opening night film. A crowd of over 3,000 audience members attended the screening at the McCaw Hall, home of the Pacific Northwest Ballet Company and the Seattle Opera Company. While an original opening night choice for a film festival that has screened works from around the globe over a three weeks period since 1976, Spy was an excellent way to kick off its 39th year. The film was received with raucous laughter and genuine applause.

Paul Feig excels once again in his casting. He brings together an international cast alongside McCarthy that includes: Jude Law as the hot one, Rose Byrne as the stuck up baddie, Jason Stratham as an amazing comedic version of himself in every other film, Allisson Janney always read with a quick sharp comeback and Miranda Hart as an excellent side-kick and friend to McCarthy.

All in all Spy is the comedy of the summer, and yes, the summer hasn’t yet begun. Paul Feig has once again set himself up as the best when it comes to female comedies. Stand by for his Ghostbusters reboot and his new partnership with Amy Schumer for more raucous laughter with a tender side.