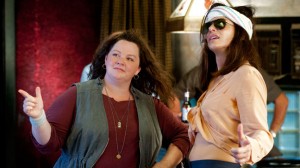 Remember the 80s and 90s? Lethal Weapon. Beverly Hills Cop. Even Rush Hour. Did we care which gender headed them? Or did we just want to be entertained for two hours? Enter 2013, enter what the majority of critics seem to want to brand the female buddy cop movie. Why? When you watch The Heat, you will laugh, you will care little about the crime they are trying to solve, and, you will laugh some more. So why is it so hard for critics to simply define it as a buddy cop movie? Because for some reason, adding the “female” terminology makes it feel like a new idea. What this also brings along is a need for it to be more, to be different from a regular buddy cop movie. No it does not critics. No it does not.

Sandra Bullock stars as FBI Agent Ashburn. She’s intense, very good at her job, but delusional when it comes to thinking she’s good in a team. The men she works with find her bossy and cocky. When a drug bust leads her to Boston, a case she needs to solve in order to bag a promotion, she must partner up with Mullins, played by Melissa McCarthy. Mullins is brash, also bossy, and as unable to work well with others as Ashburn. Just like any other buddy cop movie, the teaming up of a straight-laced know-it-all with a brash and “dangerous” know-it-all, always sets up great comedic options.  Think back to Lowry and Burnett in Bad Boys, recently Hoitz and Gamble in The Other Guys, and Angel and Butterman in Hot Fuzz. Animals also work; we all remember Tuner and Hooch.

Ashburn and Mullins butt heads initially but over the course of the film start finding common grounds and understanding. The teaming up of Bullock and McCarthy is spot on. Both bring equal amounts of humour and pathos necessary for this genre to succeed. Where questions should be asked is why film critics and entertainment correspondents feel it necessary to focus on Bullocks’ clothing. She’s in trousers throughout the film, yes. She’s a FBI agent. She’s no Scully who walked everywhere. Sydney Bristow spent most of Alias in trousers, and no one ever questioned that. No field agent should be running in heels. That said, no one should run in heels. And no that does not make her the “guy” in the movie either. What is this? 1920?

Talking about the comedic highlights of The Heat, of which there are countless, would be ruining the movie going experience. Paul Feig and the team behind the movie were clever to think of that in the making of the trailer. Unlike most comedy trailers, The Heat does not give away its best comedy moments, if anything it does something very rarely seen: some of the scenes aren’t even in the film.

Paul Feig is of course the man who directed the lady blockbuster, Bridesmaids, which helped any “busy” film critic by default call The Heat a lady movie. Viewers, The Heat is an action-comedy that piles on the humour and reminds audiences why sometimes two-hours of pure, well-written, directed and acted entertainment is just good for the soul. Kudos must be given to Parks & Recs writer Katie Dippold for a ridiculously fun script, with a flexibility for improv.

In terms of box office*, The Heat is fast on the heels of every buddy cop movie mentioned in this review. Its US box office, so far, is higher than Charlie’s Angels 1 and 2, Bad Boys, and Lethal Weapon.

The Heat is the perfect cake mix: brilliant writing from Katie Dippold, add Sandra Bullock, one of Hollywood’s best dramatic actresses pulling off straight-faced comedic moments, pour some Melissa McCarthy top notch improv, and sprinkle some Paul Feig wicked sense of humour and perfect comedic moments. This recipe has the potential to rise forever. No idea why this needs to be a cake reference, but just think of your favourite dessert and imagine being able to have it for the rest of your life, consequence-free. Bon appetit! The Heat is on! Bring on number 2.

The Heat is out nationwide from 31st July.