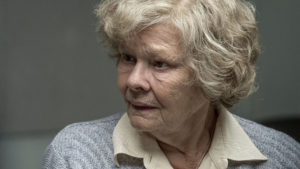 RED JOAN (or the Bexleyheath granny spy story or the KGBs longest serving asset who was caught after the wall fell) might just be the greatest failure on the screen this or any other year. Trevor Nunn’s film is limp, lacklustre and feels tired. Seemingly the film is left wanting. It hoped to be both a commentary on today’s political chaos, as well as a commentary of idealism. What it ends up achieving is something else. It made this viewer ask the question, with so much talent on offer, how did it all go so wrong?

Police knock at a door. Joan (Judi Dench) answers it and the police arrest her. Why? She has been charged with selling secrets to the former Soviet Union. In custody Joan reflects on her past. Young Joan (Sophie Cookson) was drawn into something political while at Cambridge. She meets a charming man Leo (Tom Hughes) and his sister Sonya (Tereza Srbova). They want her to help them change the world. How? By stealing secrets. 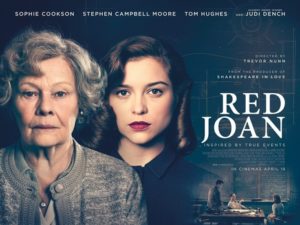 In the world of combative ideas, it is hard not to be drawn in to a story that has parallels perceived or otherwise. RED JOAN is a film of plan’s A, B and then settled on C. We see Plan A or the ‘how chaotic times can be a commentary on other times’ position. This however ends in confusion. What are the connection between 1950s, 1990s and 2010s England? Little is extrapolated because I guess the fear was to not be to political. It is not good box office. Plan B moves to a thriller template. Its very weak as a plot device because it has not weight. This then fails to herald anything tangible to motives or propellant. 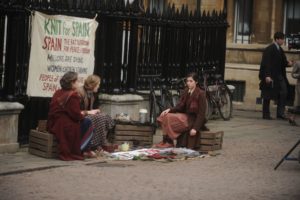 The film obviously went to plan B out of desperation for finances or contributors. Plan C is grasped at now. This is the love story position. Why they choose this is obvious. It sells. Now here it so weakened by the previous plans A and B that you feel the film is aimless. Empty plotting, reveals nothing else but a missed chance at making a film that could have asked questions about our times and what lead to them.