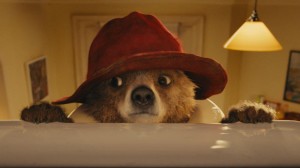 Paul King takes the directorial hotspot at a live action (with CGI bear) of everyone’s most loved childhood tale, Paddington, the bear from Darkest Peru who makes his way to London to learn and do as the Brits learn and do. Without a doubt, Paddington is the wittiest, smartest, most heartwarming family film of the year; with morals as important as the best of them, with jokes that are bound to make children and adults both scream with laughter and the best villain portrayed in children’s cinema since Glenn Close took to Cruella De Vil in 101 Dalmatians back in 1996.

Leading the cast as the voice of the bear himself, Ben Whishaw is a voice both familiar and friendly, but also with a hint of exotic mystery. Fresh off the art house circuit with Lilting, Paddington is a completely different kettle of fish and one that once again illustrates Whishaw’s constant bettering of his previous roles and widens the spectrum of the characters he has played. In small but nonetheless, important roles, Michael Gambon and Imelda Staunton voice Uncle Pastuzo and Aunt Lucy respectively. Whilst their action is confined to the opening minutes of the film, it sets the emotional tone and presents the audiences with a careful balance of serious vs. playful. Think the opening of Up with bears. But the real fun starts when Paddington reaches London to start a new life after the dreadful earthquake that literally shakes up his world.

Long before the film is set, an explorer was said to have visited Darkest Peru where he become friendly with a pair of bears (who later turn out to be Pastuzo and Lucy). He teaches them about his culture and they about theirs but the most important thing the explorer brings is marmalade, which laters turns out to be Paddington’s favourite food (as per the story goes). But in the present day there is nothing left for Paddington and he turns to London as a new home where the explorer once promised a home if they ever came to visit. Upon his arrival, Whishaw’s innocent and sweet Paddington stands lonely in the station looking for someone to help him but he is generally ignored – both in a joking sort of way (the way that the world sees the coldness of the people in London) but also pushing the audience to question themselves and their attitudes about welcoming people in.

He is all about set to give up when Mrs Brown (the delectable Sally Hawkins) chances upon the bear and questions where he is going. 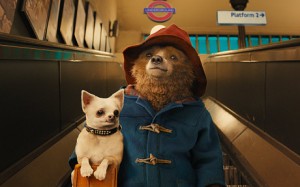 When he explains that he has no where to go, she persuades her safety first husband, Mr Brown (a very funny Hugh Bonneville) to allow Paddington to come home for the night. Almost instantly the playful and touching dynamic between Hawkins and Bonneville is easily acknowledged – they bounce off of one another and whilst the characters couldn’t be anymore different, there is a feeling that they really do love each other. Their son, Jonathan (Samuel Joslin) is over the moon that a new friend is coming back with them but teenage daughter, Judy (Madeleine Harris) really couldn’t care less, everything is way too embarrassing for her.

Here comes the first and perhaps one of the funniest sequences in the whole film, plus a brilliant example of how easy it is to forget that the bear is simply complex and wonderfully designed CGI. When Mrs Brown suggests that Paddington may want to use the facilities because that is what everyone else does, he happily goes upstairs, used toothbrushes to clean his ears, climbs atop of the toilet, pulls pipes from the walls and ends up getting attacked by the shower head. This is cut up between Mr Brown on the phone to his insurers to ask for extra cover as they have a bear staying. The incredibly funny and well choreographed climax sees the bathroom (now flooded) door open and Paddington in the bathtub goes all the way down the stairs and straight into the kitchen.

The story continues at ease with Mr Brown adamant that Paddington must go, Mrs Bird (Julie Walters) the housekeeper explaining to the children that their parents used to be very different and Mrs Brown trying to help Paddington find the explorer. Along the way a most brilliant action sequence concerning Bonneville dressing up in a woman’s outfit to help Paddington find information, goes along with one of the best. The most fun is that the cast seriously look as if they are enjoying themselves. But things take a turn for darkness when the Brown’s next door neighbour, the nosy Mr Curry (Peter Capaldi) reports the bear living in the house. This catches the attention of the evil Millicent (an astonishingly dark and intense Nicole Kidman), who wants to catch the bear and stuff him to place in the Natural History Museum. 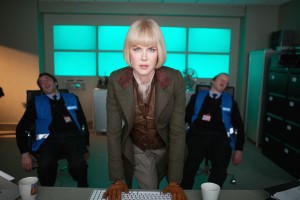 What follows is a vast array of sequences, paying homage to some of the greatest action scenes in history including Indiana Jones and Mission Impossible. Every time Kidman is on screen, she causes the audiences to shriek with horror and cower back behind their eyes – as long as she doesn’t catch Paddington! She is captivating and alluring, pulling the audience in as the film goes along – making it fun for the adults and even scarier than a good episode of Dr Who for the children.

The film works towards its natural conclusion, making the audience smile but not before showing off some of the most intense scenes in the whole of children’s cinema – making the entire audience hold their breaths – what is going to happen?

Paddington is simply wonderful – a piece of British cinema that the whole cast can be proud of and a jewel in the cinema of this year. The bear looks great and very quickly, it forces the audience to forget it is even CGI as he moves freely with the other characters. Now, we just can’t wait for the next one!