Duchazeau, the crafter of BLACKFACE BANJO and the super GILGAMESH, is an artist who can draw out a richness from an event or a experience. He steeps his work in historionics and weight but also with a style that feels sometimes cinematic. This is often a talent which allows the reader to be able to stimulate an interest in subjects unfamiliar or unexplored. He returns with his exploration of the formative time Mozart had in Paris. Now Mozart is a troubling character. Some of the reason for this is simple. He has a legend, creditied to Milos Forman and Peter Schaffer for their film and play respectively. He also has legacy. This is to say that he is well known as a child prodigy and genius. If you have ever studied music, then you will be familiar with the tutor nodding as you plunk keys and then saying..’ Your no Mozart but then who is…’ 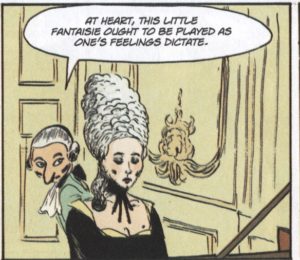 Duchazeau previous work has certainly stimulated this piece. The deffusion of myth and methodical extrapolation works well here as it did in GILGAMESH. Mozart life is a multitude of events, wonder and attractions. Duchazeau allows this to breath visually. He under develops the visual. He over details the hair but not the background. He textures the foreground to define an emotion but keeps it just under. To say it is soft is wrong. It allows the Mozart of imagining and legacy to be put at a distance. He is less sexual and more child. He is more family and less flawed genius. The script is loose enough to add to the texture of a person of talent being both genius and human. Sometimes it buttresses up against the form and its function of the novel but increasingly it defines the skill of a great writer.