Made in the USA Review

The second selection of short films that I was invited to view on Sunday at the London Lesbian and Gay Film Festival was the sapphic themed ‘Made in the USA’ which was a very different viewing experience to ‘Expectations’ that I had, had earlier in the day. The themes of the films felt like they were being aimed at a different generation of LGBT filmgoers; rather than the emotional coming out and self discovery, these films were confident in their sexuality, comical in their dealings with day to day life and somewhat sensual in their commanding of characters.

Again, as I have previously pointed out, the experience of short films was relatively new to me especially in a cinema setting with a succession which had been chosen by theme. Within the festival’s programme, the description for the films was, “There’s something for every lesbian to enjoy in this funny, sexy and thought provoking selection of short films.” But what I would like to argue is that these shorts, more than ‘Expectations’ capture a moment that many of us, despite our sexual persuasion, can emote with and sympathise and laugh and pretty much any other emotion with…

‘Nothing Happened’ is one of my favourite shorts that I watched in the entire day. There, point blank is how I want to start this review. It may sound a little biased toward the picture as it may not be everyone’s cup of tea, but for me, this picture more than any other managed to fully capture what I felt a short film should be. It should get the moment regardless of what came before and after, in fact that did not even enter my mind. I was so fully absorbed by what was happening in that moment, that important moment in the characters lives that it felt this was the most important time and the repercussions were never going to be as important. 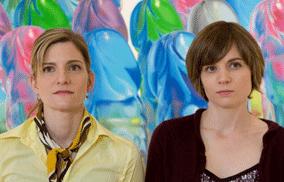 genders entering… Freud would certainly have something to say about this. But what is a silly sex question between two friends? There is no apparent theme of sexuality in the film but when the lesbian friend kisses her straight friend (after much pushing), suddenly it all clicks into place; is it love, lust or simply a way to end the conversation?

I believe ‘Nothing Happened’ is representing something much deeper and more meaningful. It is looking beneath the surface of what happened and is trying to put an emotion to disenchantment, perhaps with the life the girls are living, maybe with the relationships they have had but it clearly tries to reinstate some sort of status quo by having them return to normal at the end… ‘Nothing Happened

A film that sets up a pretence of an appreciation of film before it has even started. Looking back at what has come before so that one may understand the future is the main theme within this picture. It follows Angela who wonders quite how much she should go for the girl across the road before the moment slips away. Again, something many of us can understand about grabbing the moment but, quite understandably, from a moving picture point of view.

Angela makes up a story about meeting the girl of her dreams, then both of them getting amnesia and forgetting about each other till they are older and can no longer reconnect. The outcome of the story pushes Angela to make her snap decision and try and make things work.

For me this story contains a lot of gloss and very little substance. It tries to make a filmgoing audience who are aware of the cinema and filmmaking comfortable with their surroundings but throws them into the deep end of a story with very little depth… ironic I know for being thrown into the deep. It tries to question fate and coincidence without confronting anything and most of the dialogue is a monotonous narrator who does very little to excite events.

The film doesn’t specifically handle LGBT filmmaking directly on, as the present is intercut with flashbacks of a girl being raped in an old ice cream truck and a man tied up in Miss Creamy’s freezer. Despite all this, I believe it was chosen for its strong representation of the character played by Jennifer Sommerfield. She does not feel under stress to follow patriarchal society and rather makes up her own rules… She is a woman with a task on her mind.

Despite any cliches one could bring up about revenge, I really do love that this literalises ‘revenge is a dish best served cold’. It is darkly humorous and sexually charged and manages to capture the moment. Unfortunately, it had to rely far too much on flashbacks to fill in the story to be a strong short film in my eyes but it did have its merits.

For the first time in any of these shorts, a working family unit was represented with two mothers and a daughter. The set up feels very ‘The Kids Are All Right’ without the sperm donor turning up, but one has to ignore the similarities to understand where this film is coming from. Hanna (Beatrice Miller) wants to know where she came from and who her ‘rooster’ was. After looking on the internet with her friend Marco (Diego Torrado), she has come to discover that its not just the egg that is needed to make a child.

Questions arise about what happened and it takes a while before she gets the answers she is looking for. For me, I didn’t enjoy using animals as metaphors for what they were talking about and it felt far to sentimental. The bright colours of the fields outside and the petticoat smiles of everyone felt somewhat faked as if the world the film was being made it was trying to make the point that this sort of family unit was okay. If they were trying to make the audience feel comfortable with the situation in the film, I feel they may have pushed it too far especially as the majority of the audience would be an LGBT one.

There was a charming glossy factor in ‘Public Relations’ which made the film feel a bit like ‘The Hills’ on crack. The story follows two assistants (Summer Bishil & Sienna Farall) who would do anything for their bosses, until they meet and learn that perhaps they should put themselves first for once? It plays out like a Hollywood romance; they have been speaking on the phone, one of their bosses moves to her sisters house across the country where it turns out the other one works, they meet and fall in love.

It does work out like that, doesn’t it? But the film does very little to completely fulfil that criteria. It interestingly swerves through a world of identity crisis and self realisation, intrinsically it deals with that decision of love for the person or love for the gender. For me the film was funny and sexy, with the two main leads illuminating the screen every time they were on it. It pushed the boundaries between age, gender didn’t matter and it allowed the characters to have more fun than any other short film I saw in the category.

This was my favourite film in this category and possibly of the entire collection of short films from the day and I believe the audience felt the same way. ‘Cried Suicide’ follows Jay (Nicol Paone) who is desperate to get the attention of her girlfriend and believes if she fakes an overdose and suicide, she will get the attention that she wants. Initially I was not so sure about the premise, in-between the name of the film and 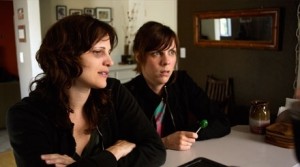 the opening scenes of a girl being brought out in a wheelchair, I thought I was going to need to be ready for a film which dealt with completely different themes to those that I was presented with.

Rather than thinking about love, relationships and the sanctity of life, ‘Cried Suicide’ looks at what your friends can provide you with in your time of need. Jay and her best friend, Jen (Sarah Burns) are visited by a selection of friends who bring food, porn, tears and parties into a world where all she wants is attention. Whilst Jay is looking for love from her girlfriend, she is given something different and stronger from those who are most important to her. She is shown that there are people around for her and they do all they can in their own peculiar ways.

The film itself is fast paced which helped massively by the intercutting and speedy editing throughout the various montages that take place. The dialogue is kept down to keep up with the film and the comedy is provided in various way, through the speech, through the mise-en-scene and physically. There is a range of characters, some of which are LGBT stereotypes but for some reason, an LGBT audience is able to laugh openly at whilst truly understanding where the characters are coming from.

‘Cried Suicide’ provides Jay with the insight that she always needed to get over her girlfriend and to prove to her that what she initially thought she wanted, was not what she really needed. Rather, she needed to know there were people around her in times of turmoil and this really does work within the bigger picture as a message that everyone needs from time to time.

‘Made in the USA’ evoked totally different feelings from the earlier ‘Expectations’ but certainly succeeded in making me laugh and appreciate the short film form. They managed to capture (for the most part) the need for that moment differently than the earlier set that I watched and allowed me to bathe with the characters rather than question their motives and what they would be thinking about after the film took place.