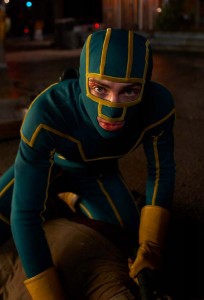 As I write, Kick-Ass has maintained a 100% score on review site Rotten Tomatoes. It’s certainly a great flick but with only 11 reviews so far it remains to be seen whether everyone will agree that it’s a totally flawless film.

Kick Ass is pure unadulterated fun. It’s hilarious and there are some great comic book in-jokes from director Matthew Vaughn (Layer Cake). However, the more satirical comments on culture and celebrities can probably be attributed to screenwriter Jane Goldman (Jonathan Ross’ spouse), including jokes about the ending of Lost to Cages take on Adam West slow speech pattern when Big Daddy is in his Batman–esque superhero outfit. But its 12 year old Chloe Moretz as Hit-Girl who really steals the show. Almost unrecognisable as the sweet little sister from (500) Days of Summer, she gets all the real ass-kicking scenes and is incredibly nifty with a variety of weapons. 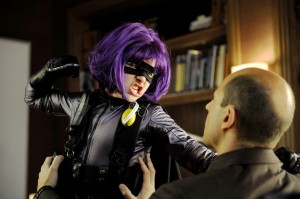 Whilst the character Kick-Ass  is content merely to try and beat up a few muggers, Big Daddy and Hit-Girl are on a mission to kill off as many of D’Amicos gang as possible. The films death count is quite high, which alongside the frequent use of expletives make it hard to believe that this film only got a 15 rating here in the UK. The action scenes are realistic and not over exaggerated, mostly because the characters have no superpowers so they do actually fall over and miss punches. The brightly coloured hero costumes and the occasional comic book text graphics give the film a fun comic book feel, and the fact that it doesn’t take itself too seriously is one of the film’s greatest achievements.

Kick Ass’ story originated from a British comic book writer, whose work was then adapted and directed by Brits for the big screen and features a Brit in the lead role. Perhaps this is why Kick-Ass feels so fresh coming on the back of a string of glossy American comic book adaptations like Sin City and Watchmen. The film feels most Americanized in a romantic subplot that sees Dave befriend a girl who thinks he’s gay, which would have been better out than in but Kick-Ass is such great entertainment it can be forgiven for this.

If you watch one film this year, let it be Kick-Ass.