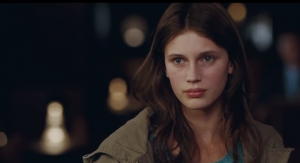 “Easy money is a downwards spiral”

Jeune et Jolie (Young & Beautiful) takes a practical and yet fantastical approach to its coming of age tale that is intertwined with prostitution. The main concept of the film has been better explored before in the likes of Belle de Jour (Luis Buñuel, 1967) which took a more satirical take on the subject matter and also more recently in the clinical Sleeping Beauty (Julia Leigh, 2011) but as a halfway point between the two this film carves its own psychological pathway.

There seems to be several films this year that have a vacuous air about them on the surface but if you dig deeper there is a disturbing callousness underneath. The Bling Ring (Sofia Coppola, 2013) immediately comes to mind. It is a film in which the youth steal from rich people’s houses not because they need to but because they can do. It’s this casual stance towards an uncaring attitude that is so revealing of the modern age. In a similar vein Isabelle takes up prostitution not because she’s forced to or particularly needs to but because she seemingly wants to. There’s a whole number of reasons why she might’ve decided to embark on becoming a high class prostitute but nothing substantial is ever offered up and so it’s as if her actions are meaningless. This makes the film an intriguing character study on Isabelle as a beacon of today’s youth.

Isabelle (Marine Vacth) initially appears as a typical moody teenager but you soon realise there is something much stranger going on in her mind. This takes its form in the way in which she gives away sex for the first time, to a German guy on vacation, which is as uncomfortable to view for us as it is for her. A ghostly apparition of Isabelle peers on as the sex takes place as if in losing her virginity she also loses her soul. She seems unable to connect with anyone her age particularly her male counterparts and has lost interest in talking to her mother and her step-father never really gets involved. The only person she displays a bit more openness to is her little brother, Victor (Fantin Ravat.) There is no faulting the performances in Jeune et Jolie particularly from Vacth who is in an understated but demanding role as Isabelle. She has to get the balance between being a beautiful delicate waif of a girl as well as someone who is in control and then out of her comfort zone again all whilst giving up no emotion or showing any signs of how she truly feels. This is remarkably played by Marine Vacth as the character could have been so easily lost and come across as a non-entity.

As the audience you are always kept at a voyeuristic distance right from the opening shot of someone peering down on her, through a pair of binoculars, sunbathing topless on the beach. From that moment onwards you are never truly let in. On screen she gives away her body freely but doesn’t let anyone have her mind or her heart. The way this has been set up makes you feel like an extra family member as you are left just as curious as they are whilst being offered a little bit more in terms of actually seeing her with her clients that just builds up even more distressing, lingering questions. There is a ‘predictable’ dramatic climax in the middle that slightly shifts the films focus and it’s after that point where the film at times verges on the dull as it becomes lax in its progression in certain places that would’ve kept it moving and undoes the drama. The mother/daughter dynamic is wonderfully played but is also the main reason the film loses its momentum as it feels like it’s unsure how exactly the characters should react to the ‘dramatic climax’ and where to go on from there. It eventually finds its footing again and towards the end it manages to bring the poignancy of the film back. Even though it’s a bit of a left turn it is a lot better than the worryingly ‘heart-warming’ wrap up that could’ve taken place prior to that.

François Ozon directs it in such a brash way that makes it feel shallow as there are definitely choices in here that could have been made tighter or taken out completely particularly the musical accompaniment that is too on the nose and fails to extenuate the films themes and undermines them instead but there is a certain subtlety to Jeune et Jolie that will leave a general audience disinterested but if you are already into this style of melancholic arthouse cinema then it can reap rewards.

In these times the nudity or sexual nature of the film won’t do much to alarm anyone but it’s the detached way it examines Isabelle’s psyche that does.