Grown-Ups, directed by Dennis Dugan (Happy Gilmore, Big Daddy) is a funny and light-hearted comedy. The classic pairing of Adam Sandler and Dugan on the production team has once again proved to be a solid relationship and this new picture is well worth a watch. 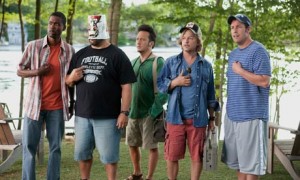 The plot follows the re-union of an old junior basketball team, shortly after having learnt of the death of their inspiration, the cunningly named ‘Coach’. Lenny (Sandler), Eric (Kevin James), Kurt (Chris Rock), Marcus (David Spade) and Rob (David Hilliard) set out on a weekend away alongside their families, in an effort to rekindle their childhood and to give their coach a proper send-off. The film brings together some excellent comic talent, which combine to bring a mixture of tongue-in-cheek humour and laugh-out-loud comedy. 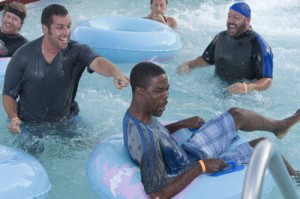 The group encounter many perils on their holiday, including a water-park zip-wire, a fantastic game i hope to try called ‘Arrow Roulette’ and their wives! Torn between leaving for the Milan fashion show or staying with his friends, Sandler makes the somewhat obvious decision to stick around and see the ‘adventure’ out.

The film comes to a climax as the fierce team they faced in their junior championship final – and beat, challenge them to a rematch. Tensions are high as Lenny, alongside his son, goes head-to-head with Dickie Bailey (Colin Quinn), the captain of their rival’s team. Going against the more traditional finale (winning, slo-mo shots, emotional music, credits), Lenny gives the game away and grants Bailey his long-awaited victory. Despite the loss, the team is content in defeat and pull together to give the ‘happily ever after’ ending we had been expecting.

Overall, ‘Grown Ups’ is a easily watched comedy with the re-united Saturday Night Live crew. Apart from being slightly predictable with some sloppy writing from time to time, it’s a good film for the latter half of 2010. We can’t expect this to remain on the chart for too long what with the line-up of blockbuster releases in the coming months but having sat on the charts at 3rd place last week, it’s doing quite alright for now.