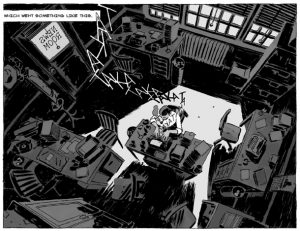 Making the rounds is the expected release of ‘Fear and Loathing’ on Blu Ray, so in preparation of this Front Row reviews this graphic novel. The great American iconoclast Hunter S Thompson became the figurehead of rebellion and revolution. Hunter began life in Louisville, Kentucky. History took him across hopes and dreams of American politics. Then on to Nixon and his lies. Reagan and America the brave. He was a journalist on the fringes of a career that was neither exceptional or illuminating. Then everything changed. He literally changed everything. Inventing “Gonzo Journalism” as his tool. He saw warts and all that beast, drooling and writhing. He opened it up, revealed its unpleasant underbelly. The broken organs and the dirty rotted brain. Revealed via observation the counter culture facing off with the great system. Drink, drugs and a world imploded. This is a furious paced piece that speeds across a life filled with hedonism and histrionics. 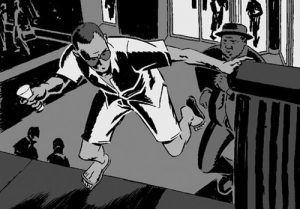 Will Bingley and Hope-Smith have produced a work that captures both the wild heart of a legend and a sanitised version of history. It is more often very funny, well observed and lyrical. Thompson could be simplified into boxes. The route most often travelled. From ‘fear and loathing’, ‘campaign trail’, ‘Gonzo’ and then everything else. 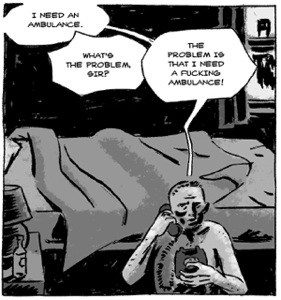 What you get with Gonzo is a much wider berth. It delves into a broader exposition. One that still fails to fully explore the life of a man who is so extraordinary but one that does some justice to his legacy. A man that shaped a discourse for alternatives, for a generation. Jumping from his childhood, to his first wife and then on to his career. Will Bingley narrates for us a tale that is less traded and often undersold.  Hoe Hunter Become an agent of a greater force, within a world that was at war with itself over a version of its destiny.  Packed inside this are subtle notes of the skill on display. Visually details are contained with stark tones of shade. This is the high point of the work for me. Thompson as a maverick but with a human side. Hope-Smith might make him a sanitised version visually but this is a service to the man. Allowing him to be both man of many beverages and man of even more letters. A man of excess and a writer who defined the monsters under the very skin of the world he inhabited. 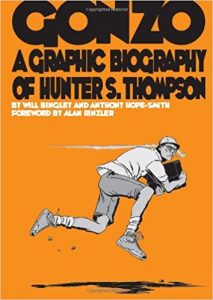