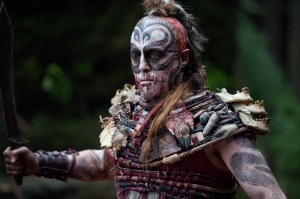 ‘Past. Present. Future. Everything Is Connected.’ An audacious tagline, however a concept that manifests in many a human mind. Our lengthy existence as a race as we continuously seek the origins of a higher power ‘at work’, or perhaps why after much practice throughout the ages many individuals continue to be catalysts behind such appalling error. This particularly ballsy premise was squeezed for every drop of ink by novellist David Mitchell in 2004. Now, the shackles of its ‘unfilmable’ tag are broken by an ambitious trio renowned for ‘trial and error’ narratives and philosophical jargon. Tom Tykwer (Run Lola Run) and The Wachowskis (Matrix Trilogy) present to you nine years later, an elaborate and enriching vision with its structure resembling a ‘futuristic Love Actually’.

Making a mockery of the term ‘typecast’, Cloud Atlas attempts to achieve the inenviable objective of weaving together six separate plot threads into a cohesive and satisfying whole, as its star studded cast defy ethnicity, sexual orientation and consistency of personality traits. Whilst their decision making albeit admirable or not, directly effects the trajectory of future lives.

Kicking off in the year 1849, we are immersed in the South Pacific as a sharply dressed lawyer called Adam Ewing (Jim Sturgess) wrestles with a contracted illness and conforming to the common belief slavery is acceptable. Triggering a domino effect of ‘time hopping’, we have the 1930′s forbidden love affair of Robert Frobisher (Ben Whishaw) and Rufus Sixsmith (James D’Arcy) as the former hightails to Edinburgh to seek refuge and collaboration with a ‘difficult’ composer. Eager to uncover the truth behind the work of fatcat employees in the 1970′s at a nuclear power station, we are introduced to eager journalist Luisa Rae played by Halle Berry. 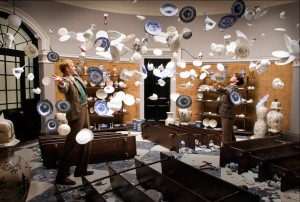 Slipping into modern day territory, Timothy Cavendish (Jim Broadbent), an accomplished British born publisher craving a return to a more fulfilling time in his life, is thrown against his will into a nursing home. Propelled into a dystopian future, a Korean clone by the name of Sonmi 451 (Doona Bae) attempts to spearhead an ‘uprising’ against an immoral society and be the key/inspiration for future generations. Now installed as a figure of worship, Sonmi is the inspiration for inhabitants of a now ‘tribal’ version of Earth as they seek survival through the contact of an ‘advanced’ civilisation.

With extreme tonal and genre shifts between the intersecting stories, ranging from the broad humour showcased through the character of Cavendish, to theheightened melodrama of Frobisher’s struggles with Vyvyan Ayrs and politically charged thrills encapsulated within Sonmi’s story, it’s remarkable how engaging ‘Cloud Atlas’ proves to be. Twisting the literary chronological order approach taken by Mitchell with Tykwer/Wachowskis instead opting for regular intercutting through impeccable editing and heartfelt narration, aids the material’s cinematic transition whilst making the concept more plausable to an audience.

Transcendent in its universal themes, the film’s ‘jigsaw pieces’ deftly compliment and tie-in within the complexities of its framework. The mistreatment of our own kind through the well documented era of slavery, echoed through the cold and unforgiving world of cloning. The spontaneity of our great loves, such as the elegant minimalism of music or the enpowering words of a bygone figure to inspire and guide us to our through troubling times. ‘Atlas’ sidesteps the potential pratfalls of similar fare by restraining itself from preachy over indulgence, allowing the ramped up emotional pay-off to creep up on you and overwhelm you in its sheer beauty. 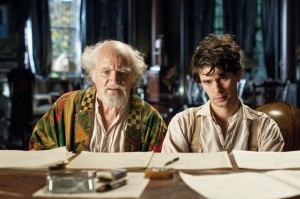 The game cast’s leaps between such diverse role playing may be all too disorientating for the casual viewer initially. Evaporating as you grow accustomed to the impressive make-up, the performances soon shine through. Any film casting the usually bumbling Hugh Grant as a terrifying cannibal should be applauded and although once again the likes of Tom Hanks and Halle Berry are accomplished in their performances, the plaudits must go to our predominant narrators Ben Whishaw and Jim Broadbent. In a wonderfully nuanced yet tortured turn as he comes to terms with his much maligned sexuality, whilst the latter exudes unrivalled wit and quirkiness, the fellow Brits emerge as the true standouts.

Prepare to suspend your disbelief that this was a $100 million product from the confines of mainstream Hollywood. Cloud Atlas is ‘out on a limb’ cinema in its purest and most exhilarating form that against the odds, connects and resonates. Visually spectacular and bursting at the seams with ambition within its lengthy running time, it may be impossible to wholly appreciate on a first viewing. However, to quote one of its esteemed characters:

‘If you could show a shred of patience, you will realise there’s a method to this form of madness.’