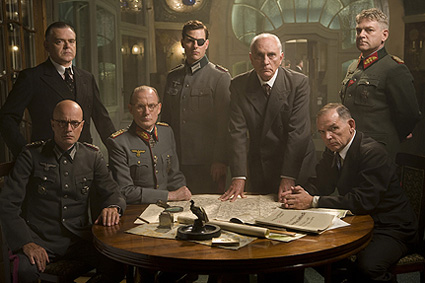 Based on the incredible true story of the Nazi soldiers who realised from the inside the sort of evil that Hitler was creating and that he had to be stopped. This film tells the story of their underground allegiance and their plans to assassinate him during World War II – Operation Valkyrie.

Tom Cruise plays Claus von Stauffenberg, the colonel who leads the plot against Hitler. Which is a shame in my opinion, as Cruise is just not good enough to pull off such a deep performance. He did well with ‘Eyes Wide Shut’ but generally he’s much better suited to films like ‘Days of Thunder’ or ‘Top Gun’.

Valkyrie remains a real thinking mans action film from the director of ‘X-Men’ and ‘The Usual Suspects’. If i have one criticism of the film its about language. We are supposed to be in 1940’s Germany but there are too many English and American actors and nobody with a real German accent.

The twists and turns along the way will leave you pondering questions of fate and luck. As is usually the case with historical drama/thrillers – we already know how the film will end. However, if you’re a fan of the Second World War, it is a very interesting film, it entertains and it gives you a fascinating insight into the opinions the Nazi’s themselves had of their Fuhrer.