Riding on the coat tails of depression era crime sprees Bonnie and Clyde and Bloody Mama comes Boxcar Bertha. It opens with the stamp of American International Pictures which means this is a Roger Corman exploitation flick, one where the savvy producer just happened to take a punt on an unknown director called Martin Scorsese. 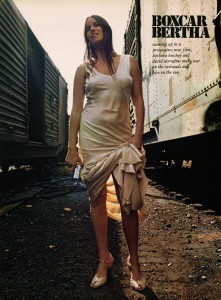 The story follows Bertha Thompson who slips into a life on the lam with union firebrand Bill Shelly (David Carradine). They lead a motley crew across the deep south to rob freight trains and stick two fingers up at the man all the while accompanied by a chirpy bluegrass soundtrack. But who cares about the story? Corman certainly doesn’t, he was more concerned with the drive-in crowd and instructed his director: “remember, Marty, that you must have nudity at least every 15 pages. Not complete nudity, maybe a little off the shoulder, or some leg, just to keep the audience interest up.” So we get regular, very 1970s, nudity and the distinct impression that we are watching a bunch of hippies playing dress-up rather than the authenticity we would later come to expect from Scorsese.

Barbara Hershey has a rawness that works well for Bertha and Bernie Casey provides some much needed gravitas but the script is confused, the performances patchy and the blood reminiscent of Hammer Horror red emulsion. Even at 88 minutes the material feels stretched. There are some glimmers of Scorsese’s talent in the inventive climax and moments of quiet character interplay but those wanting to see his potential in a pure form are best off seeking out his independent debut Who’s That Knocking At My Door? As with Francis Ford Coppola’s Corman quickie (Dementia 13) this is disposable fodder for a young audience that would provide a chance for a hungry newcomer to cut their teeth. Martin Scorsese’s next film was Mean Streets.

The Scorsese season, and the Martin Scorsese Curates programme both run at BFI Southbank until February 28th