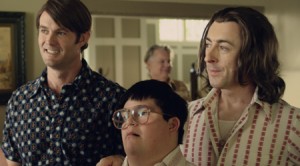 Delicate and poignant, Travis Fine’s new drama Any Day Now has taken audiences by storm in the past year, garnering awards around the US for its moving and innovative critique of the biases inherent in the American justice system of the 1970s. The film focuses on Rudy (Alan Cumming) and Paul (Garett Dillahunt), a homosexual couple who unexpectedly find themselves the caretakers of a mentally handicapped child, Marco (Isaac Leyva), when his mother (Jamie Anne Allman) is arrested on a drug possession charge.  Rudy takes the child in without hesitation after he escapes from his foster home, relying on Paul to cope with the legal complications of their actions. As their time with Marco grows, the couple begin to love and care for him as their own, all the while attempting to hide the nature of their relationship with each other from Paul’s employers at the district attorney’s office. When their love affair is discovered and Marco is taken away by child services, they are forced to battle the American legal system head on, navigating its many biases against homosexuality in an effort to regain custody of their beloved adopted son. It soon becomes evident that their fight for parental rights cannot be divorced from their fight for sexual equality and equal treatment before the court of law. As tensions rise and the couple grow ever more desperate, Marco’s future becomes increasingly uncertain.

Travis Fine directs with grace and elegance, transforming what could have otherwise been a melodramatic and overly sentimental story into a raw and authentic look at the ties that bind lovers and families together, regardless of sexual orientation. The intimate camerawork and simplicity of the domestic sequences ensure that viewers are subtly pulled into a naturalistic drama that makes no pretense to offer grand, sweeping solutions to social justice issues that continue to plague our society nowadays. Home-video aesthetics add touches of familiarity and bliss to the footage of familial moments, creating a sense of privacy as viewers explore the domestic lives of this ultimately ordinary family. This is not to say that the film is without its histrionic moments, however. The musical performances that Rudy partakes in as a drag queen are frivolous and flirty at the beginning, setting the stage for the development of his relationship with Paul. The later musical numbers are demure and intense by contrast, but fail to erase Rudy’s previously frisky persona and somehow don’t entirely convey the pain he communicates so evocatively in his acting otherwise.

For the most part, however, Any Day Now stands out as managing to brilliantly intersect problems of marriage equality and prejudice with the difficulties 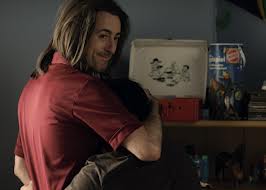 inherent in parenting, particularly in terms of handicapped children and the increased care they require. Fine questions the preconceived differences between straight and gay parenting, probing into how societal discrimination can become not only objectionable, but dangerous. His tone feels critical but never preachy, achieving a voice that not only exposes the issues at hand but humanizes them, allowing the audience to access them in a truly relatable manner. 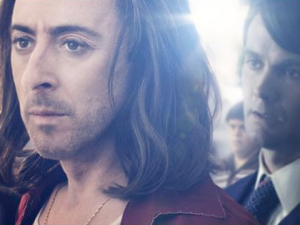 Essentially, Any Day Now tackles a challenging storyline with an eye to the troubling implications of the prejudice and biases that hamper the American justice system. In blending a memorable lead performance with meticulous cinematography and powerful writing, Travis Fine has crafted a deeply emotive cinematic drama that utilizes a historical setting to treat extremely current social issues. Though both a gripping portrayal of the inequalities of justice and an authentic examination of the difficulties inherent in securing parenting rights for homosexuals, Any Day Now ultimately goes beyond its political agenda to offer an absorbing and pensive story of familial love.

Any Day Now is out in cinemas today from Peccadillo Pictures; to find out where you can catch the film, check here.