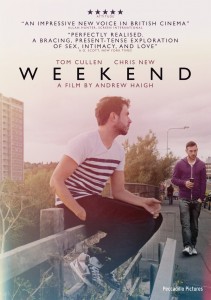 Earlier this year I attended a press screening in the London SoHo Rooms of Peccadillo’s Picture’s Weekend directed and written by Andrew Haigh who has previously worked in film editing from Ridley Scott’s Gladiator to Harmony Korine’s Mister Lonely. Since then, he has made a number of short films that have screened at festivals all over the world and in 2008 was named as one of Screen International’s ‘Stars of Tomorrow’.

The synopsis of the film from the press release states that “On a Friday night after hanging out with his straight mates, Russell heads out to a nightclub, alone and on the pull. Just before closing time he picks up Glen. And so begins a weekend – in bars and in bedrooms, getting drunk and taking drugs, telling stories and having sex – that will resonate throughout their lives.” But this synopsis only manages to hint at the extent to which this film is able to mean so much to so many different people. As a film that will typically be aimed at an LGBT audience (due to the sexuality of the main characters as well as the fact it was produced by an LGBT production studio), I don’t believe it will gain the momentum within mainstream that it truly deserves. If you took out the fact that the main characters were gay, the themes of the film would echo throughout all our lives, whatever your sexuality.

Earlier this year at the London Lesbian and Gay Film Festival, there was debate about whether LGBT films are still necessary within contemporary cinema or whether Hollywood or mainstream representations of homosexual characters were welcomed enough into the sorts of films that you would see at your local multiplex (examples included those seen in films like The Kids Are Alright) but many still saw a necessity to segregate LGBT films from ‘heterosexual’ Hollywood films. Whether this is down to a generational divide or whether representations of LGBT characters are still not fully rounded enough as yet to be completely integrated, films like Weekend come along and remind audiences that there are no differences between heterosexual and homosexual relationships; the emotions, the tensions and the workings of a relationship between two people remain somewhat the same. I walked away from Weekend feeling a purging of thoughts and emotions about not just love, not just relationships and certainly not just our contemporary attitudes to sex but rather what makes us unique from any other person. I took away the sentiment of each of us fully recognising the gap between who you want to be and who you are in reality; in a utopian world, the gap wouldn’t exist but very rarely in reality is that the case and Weekend certainly tries to confront those elements of the personality that make you who you are.

The film’s two main stars, Tom Cullen and Chris New star as Russell and Glen respectively and at the start of the film, they are two very different characters. There is a contrast between the two protagonists when it comes to being comfortable about talking about sex, about sexuality, persona and histories (both public & personal) and as the film points out, much of the time, one simply projects an image of themselves when sleeping with someone but it takes much more to be able to crumble below the surface. 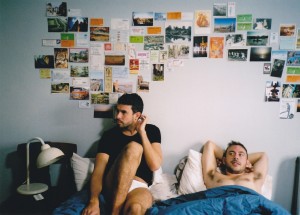 In a Q & A with Haigh at the SXSW FILM FESTIVAL 2011, he was asked about his work with gay themes and the issues that gay characters face within the film and most interestingly, he points out that rather than creating a film about ‘coming out’, he wanted to create a film about dealing with sexuality once you’ve already done all that. “I wanted to tell a story about how people deal with their experience, especially how people respond to the weight of being different, of not fitting in. I was interested in whether a person chooses to let their sexuality define them, and if so, then how… Of course I think it’s worth saying that you don’t need to be gay to be struggling with issues of authenticity and self-definition, and of course at the heart of Weekend is a story of two people falling for each other. This, obviously, has very little to do with being gay.”

So here is where I started this review, you don’t need to be gay to appreciate the fact that everyone sometimes has to define themselves and sometimes you can’t define yourself to others until you can appreciate your own authenticity in society. Sure, there are points when the film looks like it wants to deal with LGBT issues like walking down the street as gay, two men together still does get a reaction from heterosexual people but as times move on, it certainly looks like something that people are coming out of the Iron Ages over. Whether this quality yet is ready to move completely into mainstream cinema is something that remains to be seen but cultural hegemony is certainly changing the definitions of sexuality within our culture and what was once seen as alternative identities may now be much more widely acceptable.

Another quality of the film that was a stand out for me, was the simply feel of voyeurism throughout the mise-en-scene. The colours were very subtle and neutral throughout, the skyline took over the landscape in the very brick layered surroundings and yet this juxtaposition between something so natural and something so man made was an interesting feature. Does your sexuality define you, or does it remain natural and something that you cannot control? As you watch Weekend, you see Russell & Glen through various walls and gates and holes and this theme remains throughout the film; the act of simply observing the human condition. And just as the film is drawing it’s conclusion, you figure out that Haigh is not portraying some sort of utopia where everything works out completely how your feel it should, rather life gets in the way of life… See what I mean?

For a calm mise-en-scene, brilliant acting (especially from the main two) and a storyline that certainly questions something much more than LGBT issues, check out Weekend due for release on 4th November 2011.