The Importance of LGBT Cinema with Ana Souza (Outfest) 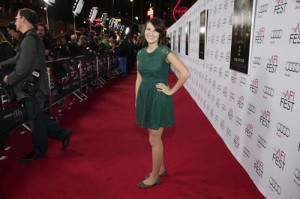 As the glitter starts to fade on BFI Flare 2015, which some a great selection of features, documentaries and short films from around the world we decided to look forward and see what else we can expect from LGBT festivals for the rest of the year. We have recently caught up with Ana Souza, the latest recruit to the incredible Outfest team in Los Angeles. As the team prepare for the 2015 edition (July 9-19), Ana (who is working as the Programming Coordinator on their Programming team) sat down to chat with us about working on both the USA and UK circuit (and does she believe there are any profound differences) as well as looking at the importance of LGBT cinema today. Someone in her position, working to help exhibit and promote these films around the world (people from everywhere will visit LA during July to see what they have on offer), is integral in aiding LGBT filmmakers to tell their stories.

On the differences between the US and the UK Circuit

Ana Souza: This question definitely invites some generalizations so forgive these in advance! But it has been my experience that LGBT rights and the LGBT movement as a whole has been more accepted in the UK in the public sphere than in the US. Both countries still have a long way to go in terms of establishing and defending LGBT rights, the clearest example being the recent and outrageous Indiana Religious Freedom Bill. I think the two festival circuits have similar goals in bringing LGBT stories to prominence and giving them wider audiences, while still respecting the huge range of LGBT perspectives (and there are so many intelligent and wonderful stories to tell! – ed). I think that European and Latin American LGBT filmmakers in particular are taking some serious risks in their filmmaking lately and delivering some wildly original stories, while I’ve seen some incredible and thoughtful documentaries in particular emerging from the US. What I also love about Outfest is their Legacy Project initiative, which is one of the first archives in the world dedicated solely to preserving LGBT films, and that’s something that needs to be kept in mind – LGBT cinema has a long history that needs to be protected worldwide.

On the Importance of LGBT cinema

AS: I think LGBT cinema today is more crucial than ever for several reasons. It’s a marginalized group that deserves a voice and deserves equal rights, equal opportunity, and inclusion; these stories should be shared with people of all sexual orientations because above all they are human stories that deserve a wide audience. I find that the ‘othering’ of LGBT culture has readily tied it with independent cinema and alternative perspectives, and these are so unbelievably welcome and necessary, and I am so thankful for the festivals and distributors that are able to get these stories noticed and seen.

On the artist known as Franco

As much as I do have a self-aware soft spot for James Franco (Spring Breakers really brought this out in me somehow), I think it’s complicated for him to present himself as ‘gay in his art’ and ‘straight in real life’. I think he wanted to grab onto the fact that he has been portrayed as gay by various sources and run with that as a liberation of sorts that ascribes his art to a kind of openness and willingness to experiment. While I do think a lot of the work he does has this sensibility I think it’s problematic to equate that with homosexuality. When that is such a real, life-changing and life-defining sexual discovery for many it feels narcissistic that he would try to appropriate that. But then again, what did we expect from him?

On the Trends in the circuit

One trend in particular that I have increasingly noticed is a more complex take on bisexaulity, which has typically been lacking in cinema in general and even within LGBT films. I think it’s the kind of thing that requires serious treatment but often is represented in a light, almost flippant manner. I’m glad to see this change.