For an exclusive preview of the cinema trailer along with a full list of cinemas with links to buy tickets visit: 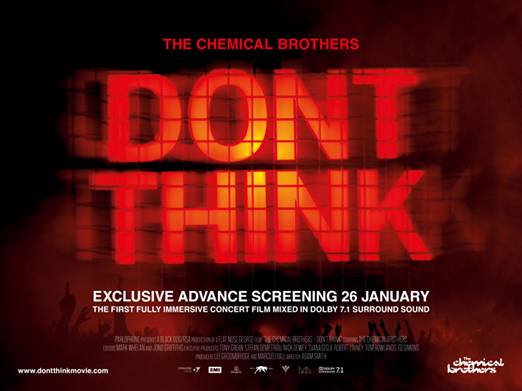 You blink awake and find yourself halfway up the side of a Japanese mountain. It’s night time, right at the sticky middle point of summer. You’re in an opening in a darkened wood surrounded by – say – 50,000 other revelers, each of them frenzied; delirious from an all-encompassing psychedelia that seems to be emanating from a stage somewhere in the near distance. Above you, lights swoop and strafe across armies of marching toy robots and galloping deconstructed horses; paint balls explode in front of borderline psychotic clowns. You’re in the thick of it, consumed by the spectacle, absorbed into the crowd, surrendering to the noise and the visuals. Stunned by the jaw-dropping intensity of what you’re witnessing, just one thought flashes through your febrile mind.

Filmed with 20 cameras at a headline show at Japan’s very own Glastonbury – Fujirock Festival – Don’t Think is the first time the full Chemical Brothers’ live experience has been captured on film. Directed by long-term visuals collaborator Adam Smith this full-length concert movie places cameras in the centre of the stage as well as at the very heart of the crowd to perfectly capture a fan’s eye view of the heightened emotional reactions of the audience seeing the band at their very best.

During the film, Smith takes advantage of one of the most unique festival settings in the world when he follows selected audience members away from the stage and out into the natural environment. Then, by adding avant-garde magic realist moments where trippy visuals leave the screens and invade the open spaces of the festival, Don’t Think undergoes a transformation from concert film to fully immersive document of one of the most mind-bendingly psychedelic live shows ever seen. With an extensive global cinema run, the film offers audiences a powerful alternative to the reduced circumstances of watching gig footage on You Tube clips and mobile phone screens.

Shot on location on Sunday July 31st 2011, Don’t Think is the first concert film to feature glorious Dolby 7:1, surround sound, mixed for the big screen by the band themselves. It is due to be shown on more than 500 screens in over 20 territories from 1st February 2012 (3rd February in the UK). The film has been produced by Marcus Lyall and Lee Groombridge for Ridley Scott’s production company RSA Films in association with ML Studio.

Quotes from the Director and The Chemical Brothers:

Adam Smith: “After 18 years of working on The Chemical Brothers live show we have finally captured it on film; you could almost say it’s 18 years in the making The aim was to create a different type of concert film for a different type of show. I wanted to capture what it is like to experience the show from right in the middle of the crowd as well as showing and combining the visuals featured in the show with the footage we captured on this one night; to see how the music and visuals emotionally affect and connect with the audience. By using small unobtrusive cameras – and with thanks to the kindness of the amazing Japanese crowd – we were given privileged insights into the private moments of joy, fear and ecstatic escapism from reality that this show induces. Included in that are flights of fantasy around the festival that are going on inside an audience member’s head. We also allowed some of the images from the show to head off the screens and invade the festival. Over the course of the film, we are taken on a journey through the psychedelic trip that is the Chemical Brothers live experience.”

Tom Rowlands: “In the recording of a single show – a single night on a Japanese mountainside – Adam Smith, our long time collaborator, has managed to capture the atmosphere of a very special festival appearance. Come see how it feels to feel, be overwhelmed, intoxicated, swoonerated… Surrender to the void”

Ed Simons: “This film is the closest I will ever get to being at a Chemical Brothers show… and yeah, it’s a beautiful experience.”

Reviews of the band’s most recent live shows:

“Tom Rowlands and Ed Simons put on a show that combined brutally modern electronic sounds and hardcore dance beats with a breathtaking visual and aesthetic dimension that echoed the psychedelic era of the 1960s.” (The Times)

“Visually, they kept it sleek, splitting the film projections between the steelier atmospherics of recent work and cracked candy colors of first-wave rave. There were surely a few thousand people who went home with nightmares from that intermittent projection of a cackling demon clown. But the Brothers’ long, thrilling turn did one of the hardest things possible in the perpetual-motion-machine of dance music — it proved that you can define a decade sonically and still have a vision of a path to the future.” (The LA Times)