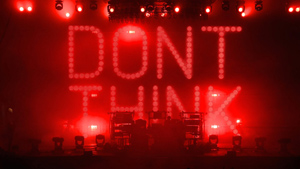 It’s now been three years since The Chemical Brothers Don’t Think concert film was released. Back then, the BFI hosted a Premiere of the film, which turned out to be a very special evening with a great selection of guests and a memorable after party in the bar too.

In celebration of the upcoming new album Born in the Echoes, out 17th July and the first Chemical Brothers release since 2010’s Further, Sonic Cinema (the regular music based strand from the BFI) hosted a special midweek screening event at the BFI Imax, Waterloo.

The screening was introduced by Adam Smith, creator of all the visuals, Director of Don’t Think – who is often referred to as the third Chemical Brother and Stuart Brown, Head of Events, “it’s a good a place as any to be in London on a Wednesday night” he claimed, and he wasn’t wrong. The Chemical Brothers visuals demand to be seen on a big screen – and where better than the IMAX? The UK’s biggest screen!

As a prelude to the main film we were treated to an exclusive look at some of the new tour visuals that will be airing at the live shows over the summer and an unreleased piece of music. They were very cool as you would expect. A slight change in direction from what we’ve seen before. They had a tribal/multicultural feel with lots of psychedelic colours and imagery.

It’s been just over twenty years since the Dust Brothers became the Chemical Brothers and they continue to output quality dance music and push forward the AV spectacle of live shows. Since the early days they have been famous for having a full audio-visual show that has developed a lot over the years, now being shown with increasingly big stages and production level.

Until the Don’t Think film was made, there was no real properly documented footage. The live gig was filmed at Fuji Rock Festival in 2011 to a crowd of 50,000 using 21 cameras… and a hell of a lot of slick editing in post-production. The challenge of presenting a live show like this as a film is a very difficult task but Adam Smith has triumphed here. He successfully plants you into the audience and overloads you with a barrage of sound, film and light for 85 minutes.

I’m guessing most people in the audience had seen the film before and just wanted to enjoy it on a grand scale – definitely the sweet girl with glow sticks who started dancing in the aisles. It’s a shame more people didn’t join in but it was the earlier screening of the two on the night. I expect the later was much more rowdy. 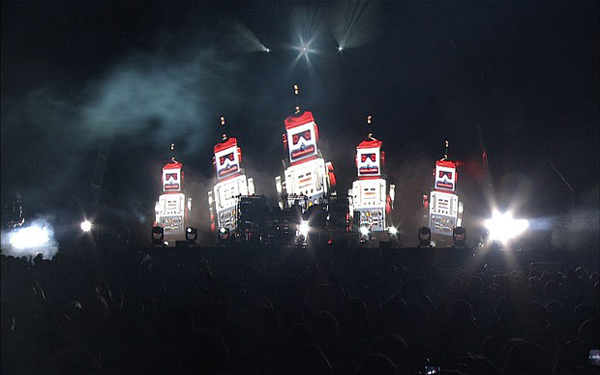 As if often the case with live electronic acts that have no front man so to speak compared to a standard band, the visuals themselves become the front man and the element that the crowd can most connect with. This is very evident in Don’t Think. Adam Smith takes you on a psychedelic journey through the gig, as close as you could get to the atmosphere without actually being there yourself. The show features all the classic tracks and visuals from the last few years, including the clown face – brilliantly played by actor Mark Monero (Grange Hill & EastEnders). There is a great section in the middle of film where the visuals are taken for a Walkabout, literally. The main screen visuals are re-purposed using Walkabout Projection technology by Prickimage which allows the crowd to interact with them around the festival whilst they are projected onto the trees, food stalls and muddy ground. 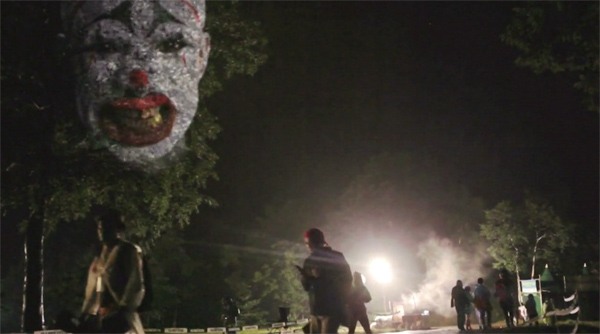 I look forward to seeing another concert film from these guys in years to come but one thing for sure – Don’t Think will go down as one of the best concert films ever made.

On a separate note – there is an upcoming screening of the Beastie Boys Live Concert film ‘Awesome! I F***in’ Shot That’ by a local cinema collective Deptford Cinema, based in South London. The film is to be screened onto 3 huge walls using multiple projectors so that you are completely surrounded by the movie, there will be no seats, standing only!… I would love to see Don’t Think screened in a similar fashion.

Next up from Sonic Cinema will be a very special live audio-visual show from Public Service Broadcasting as part of the Britain on Film project. The London based duo will be presenting their live show which features a lot of footage from the BFI National Archive, some songs from their latest Race for Space album and a few hits from their back catalogue. J Willgoose, the mastermind behind PSB, will be in conversation before the show. Tickets are on sale here now.