Back in January this year we reviewed the cinematic release of the ground-breaking Chemical Brothers video Don’t Think. You can read that here. On it’s release, selected cinemas across the UK were turned almost into raves.

Having seen it play out in the main cinema at the BFI, after three or four tunes had played, the audience could no longer contain themselves and jumped out of their seats to dance. Amazing. I’ve never seen anything like this in a cinema. Except perhaps for The Prodigys Warriors Dance film. That was pretty much just a straight video of a gig that you would see on TV. Don’t Think is very much a different atmosphere, that tries its hardest to transport you into the middle of the gig… and it does an incredible job. 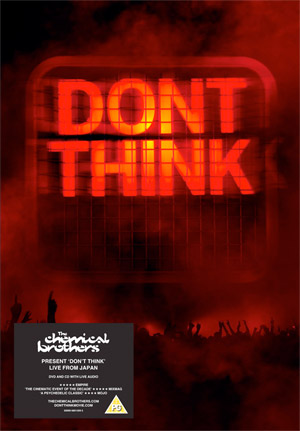 Don’t Think is now available on Blu-Ray and DVD for home viewing. Hows does it compare to a full on cinema experience? Very well. As long as you have a decent screen and sound system! The image and sound quality is beautifully clinical. You would be hard pushed to find anything better in the market.

Directed by Adam Smith, the guy who has behind making the spectacular visual sets for The Chemical Brothers for the last 15 years. This gig was originally captured in 2011, at the iconic Fuji Rock Festival in Japan. The range of camera angles, subtle blurred background shots, audience reactions and huge spectacle are captured excellently. The editing of the film is near perfect. The only music/gig videos i can think that come close to this is the classic Pink Floyd, Live at Pompeii gig. Of course with Pompeii, there is no crowd.

Don’t Think stands out miles from anything else and will be around for a long time before anyone gets close to it in terms of recreating a live atmosphere on film.

The Chemical Brothers have long been known for the quality of their live shows and this video does a very good job of capturing the barrage of sound, film and light and the transforming effect it has on its audience though the iconic back catalogue of songs.

The Blu-Ray itself comes with no extra features, but there is a CD which is equally as good. The CD features several tracks that are not in the video.

If you’re a fan of electronic music then you can’t go wrong with this package. Simply Sublime.